May 31, 2014
Holy moly, another month that just flies through… and this month I thought I would read less books than previous ones since I had to study for my finals (which I’m still doing because they are the first week of June) but I still managed to read 9 frigging books! 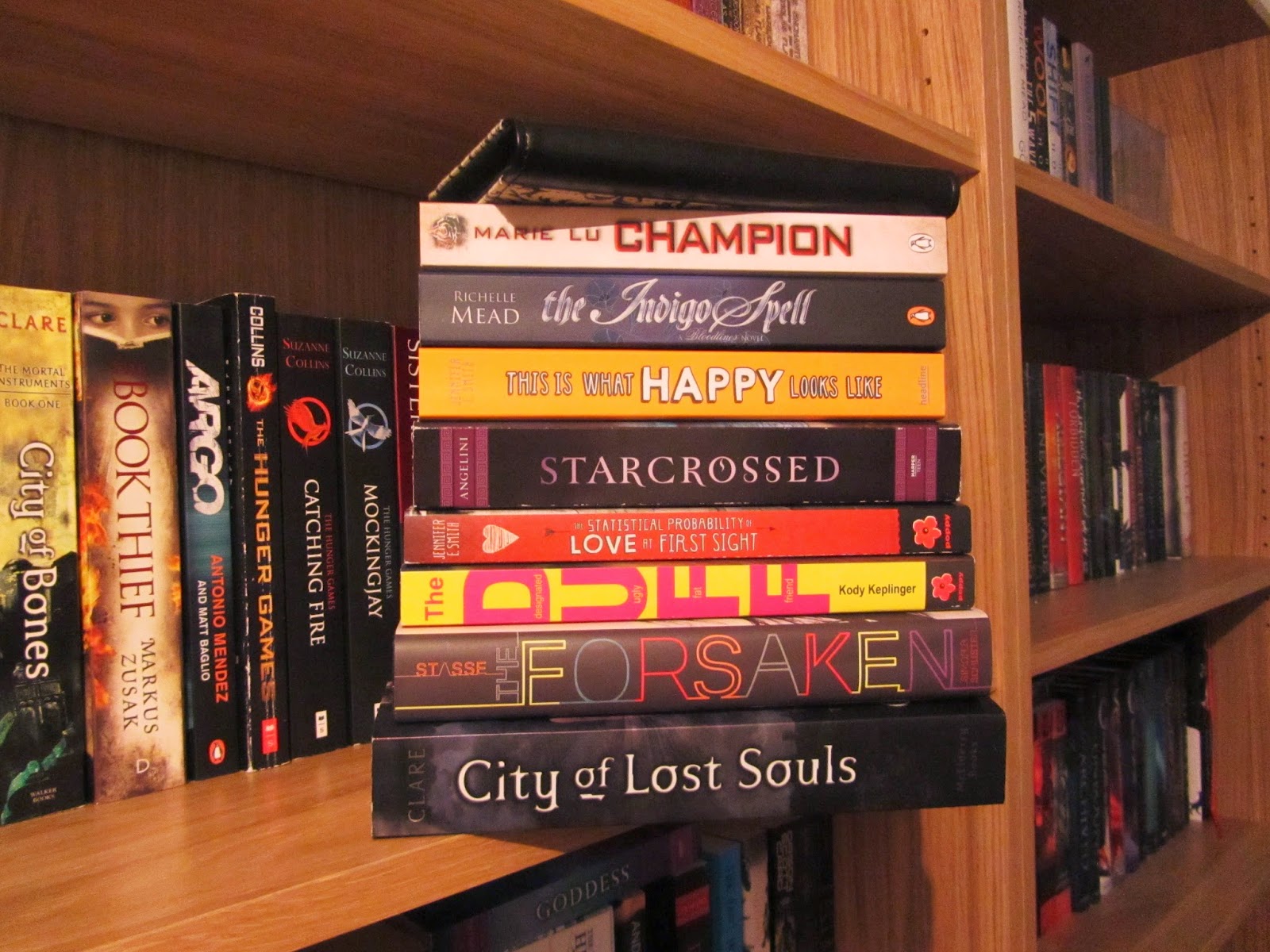 1. The Indigo Spell by Richelle Mead
2. The Forsaken by Lissa. M. Stasse
3. The Statistical Probability of Love at First Sight by Jennifer. E. Smith
4. The Warrior by Ty Patterson (Kindle version)
5. This is What Happy Looks Like by Jennifer. E. Smith
6. The DUFF by Kody Keplinger
7. City of Lost Souls by Cassandra Clare
8. Champion by Marie Lu
9. Starcrossed by Josephine Angelini

First I picked up The Indigo Spell, the 3rd book in the Bloodlines series and I loved it so much. I gave it 5 stars.

Then I read The Forsaken which was a bit of a disappointment for me. I ended up giving it 2 stars, but if you want to know more about my thoughts, here is my full review: http://adayinbookland.blogspot.com.es/2014/05/the-forsaken-by-lissa-m-stasse.html

The Statistical Probability of Love at First Sight was one of my tbr-jar choices this month and it was a very light and fun read. 4 stars.

The Warrior was sent to me by the author in exchange of an honest review which you can read here: http://adayinbookland.blogspot.com/2014/05/the-warrior-by-ty-patterson.html  (also, 5 stars).

After that I wanted something lighter so I picked This is What Happy Looks Like and despite it was a little bit cliché I still enjoyed it, so I gave it 3 stars.

The second choice of my tbr-jar was the DUFF and holy mother of all times, this was A.M.A.Z.I.N.G. I gave it 5 well- deserved stars and I also did a full review. You can read it here: http://adayinbookland.blogspot.com.es/2014/05/seventeen-year-old-bianca-piper-is.html

My next book, City of Lost Souls, was a re-read in preparation for City of Heavenly Fire (which I’m still waiting to come). I loved it as much as I did the first time I read it. 4 stars.

While reading City of Lost Souls I picked up Champion to finally complete the Legend series and MY FEELS!!! This is probably the best ending of all the dystopian books I’ve ever read, even though it brought me to tears as well. No guesses here: 5 stars.

Finally, I picked up Starcrossed and it was a bit of a letdown. I will still be reading the other two books in the trilogy but still, I was expecting more. I gave it 3 stars.

And that’s it for May! Let me know what you have read as well =)

Go find me on Goodreads!