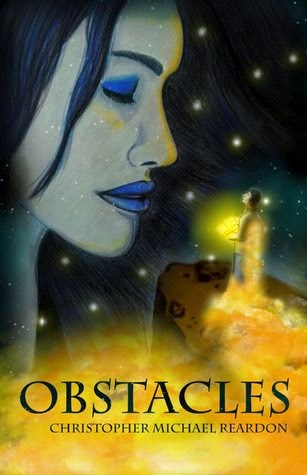 Title: Obstacles {Goodreads}
Author: Christopher Reardon
Pages (format): 256 (e-book)
Publication Date: August 29th 2013
Publisher: Solstice Publishing
Buy it: Amazon
Summary: "A child will die. You’re afraid to live. Would you go to all lengths to save him? Darkness knows no bounds, as Alcott, an African American doctor sees all too well. The man is petrified by death. His fragile existence rests at the mercy of the universe. This fact is far too much for him to handle. From unyielding nightmares to elevator terrors, he’s lost in paranoia. Assigned to look after an ill child, Alcott’s horrors only heighten. Gari is a nine-year-old boy with a fatal disease. He will surely pass on within the year. Alcott bonds with him more and more each day. Part of him knows this grim fate just isn’t right. Alcott befriends a hospital patient. This lunatic forces him to lug home an ancient text on bringing back the dead. Despite the man’s obvious dementia, Alcott attempts the scheme. Charging up a cliff, he recites the chant over ocean gusts. A god woman glides in from the horizon. She instructs Alcott on the trials to save Gari’s life. These fearsome Obstacles require true strength. From battling sharks to wielding a flail, he must prove fortitude against genuine danger. Alcott decides his fate at this moment. Death’s claws shall not grasp Gari’s soul".


{First of all, I need to thank the author, Christopher Reardon, for allowing me to read his book in exchange of an honest review}

Obstacles follows Alcott, an African American doctor who is taking care of a little kid called Gari who suffers from terminal cancer. One day a patient shows Alcott a book about bringing back the dead and so he goes to a beach and chants one of the spells. A woman materializes and tells him there is a way to keep Gari alive; he has to overcome some challenges known as the Obstacles, where he would have to prove himself, in order to keep the boy alive. But there is, of course, a catch: to keep the boy alive, Alcott would have to give up his own life. While I liked the book, I also had some problems with it; character-wise mostly.

The plot is what caught my attention; it was original and well-thought. Also, it deals with quite a heavy topic: death. Death is something inevitable and we all will come to dust at the end (was that goo gloomy? I’m sorry) but, deep within, Obstacles is more than just accepting death; it’s about overcoming our fears as well. The writing style was simple yet it allows the reader to fully imagine what is going on and I could picture everything in my head without a problem which always helps when trying to follow a story.

Another aspect I highly enjoyed about this book was the obstacles themselves. They were interesting and I had such a fun time reading how the characters faced their fears. And, yes, I’m talking characters in plural because once Alcott accepts taking part in the challenges other contestants join in as well. But, don’t let that fool you; it’s not about competing against each other but about joining together to help each other out which I thought was another great element of the whole story.

However, as I mentioned before, I had some problems, especially regarding our main character Alcott. He is a thirty-something-year-old man and a doctor in that and yes, I do get he’s been scared of death his whole life but sometimes I had a hard time believing he was in his 30s. His train of thought was a bit childish and he seemed like a teen boy rather than an adult. There is some character development though and he did grow, as well as the other characters, but he was so infantile at the beginning and now and then in the middle of the story that, like I said, I had troubles picturing him as an adult. I do believe if the book had been longer the character development would have been greater, but I’m happy with what I read in the end.

The conclusion was probably my favourite part of the novel; not only because it was so action-packed but because of how everything was tied together. The last chapter really made me smile because it genuinely made me happy and was somehow satisfying.

So, what is your biggest fear?