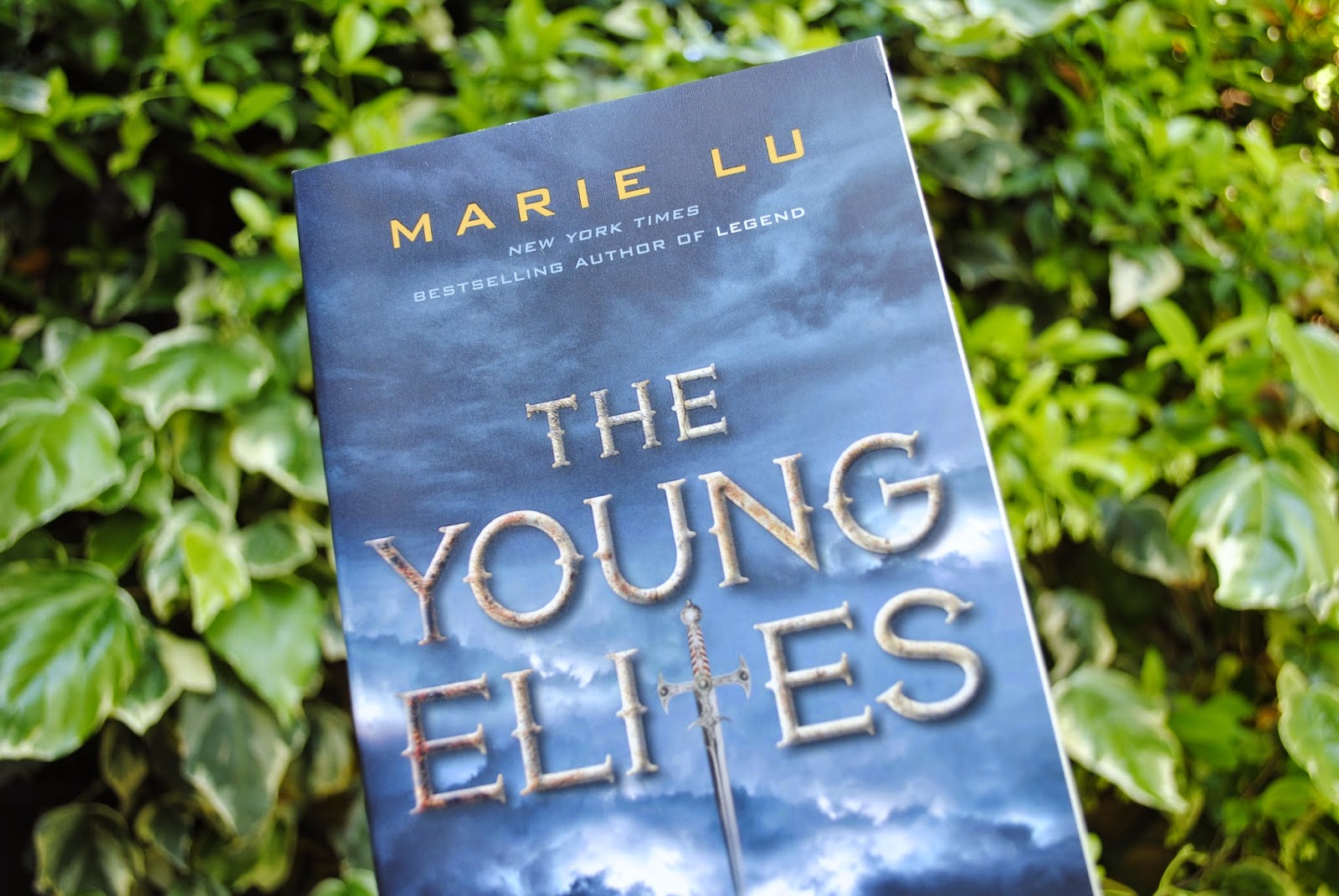 The Young Elites by Marie Lu {Goodreads}
Published by Penguin in 2014
Paperback edition; 355 pages {BookDepository}
"Adelina Amouteru is a survivor of the blood fever. A decade ago, the deadly illness swept through her nation. Most of the infected perished, while many of the children who survived were left with strange markings. Adelina’s black hair turned silver, her lashes went pale, and now she has only a jagged scar where her left eye once was. Her cruel father believes she is a malfetto, an abomination, ruining their family’s good name and standing in the way of their fortune. But some of the fever’s survivors are rumored to possess more than just scars—they are believed to have mysterious and powerful gifts, and though their identities remain secret, they have come to be called the Young Elites.Teren Santoro works for the king. As Leader of the Inquisition Axis, it is his job to seek out the Young Elites, to destroy them before they destroy the nation. He believes the Young Elites to be dangerous and vengeful, but it’s Teren who may possess the darkest secret of all. Enzo Valenciano is a member of the Dagger Society. This secret sect of Young Elites seeks out others like them before the Inquisition Axis can. But when the Daggers find Adelina, they discover someone with powers like they’ve never seen. Adelina wants to believe Enzo is on her side, and that Teren is the true enemy. But the lives of these three will collide in unexpected ways, as each fights a very different and personal battle. But of one thing they are all certain: Adelina has abilities that shouldn’t belong in this world. A vengeful blackness in her heart. And a desire to destroy all who dare to cross her."

My only and true motivation for picking this book up was because I really enjoyed reading the Legend trilogy by Marie Lu when I read it last year, and believe, that tells a lot considering YA dystopia and I aren’t on the greatest of terms right now. Plus, you all know fantasy is like a big YES from me. It’s my favourite genre!

Unfortunately, as I said on my April wrap-up, The Young Elites failed to impress me. To be fair though it’s not entirely the book’s fault. Why, you may ask? You see, my last fantasy read before this one was The Well of Ascension by Brandon Sanderson and it’s not easy to top that, especially being The Young Elites YA. I don’t want to be mean but, really, there is no comparison there. In other circumstances I wouldn’t dare compare them since I consider the Mistborn trilogy to be an adult series although now it’s been targeted as YA; but I read them both in the same month and of course, it influenced my opinion. I would be lying if I said otherwise.

Besides this, I had troubles with most of the characters and the storyline as a whole. But let's discuss first the storyline. Yes, it is the first book in a trilogy and yes, it is not supposed to be incredibly awesome; it’s more about building up the world and the background story. However, and considering this, there were many things left unexplored which I wish Lu could have addressed, in particular the magic of the malfettos. Why did some have powers? Why other didn’t? It was a bit like X-Men in that aspect. A lot of people with different powers but with no reason whatsoever as to why one person could manipulate air, another minds and so on. I was craving for more and I didn’t get anything.

Also, and related to the last paragraph, the story fell flat to me and not appealing, at all. I didn’t feel invested in it and due to this the twists, although surprising, didn’t wowed me in the slightest. One of those twists though annoyed me because I thought it wasn’t necessary.  Again, I don’t know where Lu is planning to go now with the series so maybe it does make sense within the next two books, or maybe not. Who knows?

Finally, let’s talk about the characters. Adelina is indeed a strong female character but naïve too and she irritated me with some of the decisions she took. The others had potential but, again, at the end they felt like such a waste of good characters. I only saw real motivation behind the actions of one of the characters, and it was not enough.

I wish I had enjoyed this more but I didn’t and it means I will most likely not be continuing with this series. And now my question is, have you ever read two books one after the other and the first one completely outshine the other and then, your reading experience is not the same with the second one?