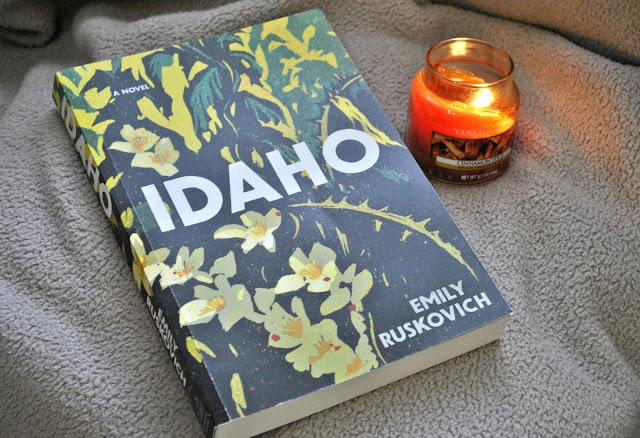 Idaho, Emily Ruskovich’s debut novel, deals with the repercussions of an accident – involving the mother and an axe – that happened to a family many years ago. I don’t want to give much away because I feel like it is better to go in not knowing the full details although most of it is revealed very early on. The consequences of this event are what the novel focuses on.

This is a story about people and how what happened in the mountains changed everything, how it affected those involved in it and those who came into the lives of these characters afterwards. This is not a novel about a crime; if you’re expecting a big jaw-dropping reveal you’re not going to get one. It is a quiet, slow and character-driven novel. The story is out of chronological order, it is told in a third person point of view and follows different characters: Ann, the new wife; Wade, the father; Jenny, the ex-wife and some others.

This book is about many things but one of the most interesting was the losing of one’s memory. Wade, the father, has a genetic illness that affected both his father and his grandfather. Both of them lost their memories and Wade knows that eventually, it will happen to him and he tries to battle it. So throughout the narrative there is this sense of certainty that he will lose his memory but also the fear of that certainty. Idaho deals as well with grief and how to cope with it but also about the possibility of forgiveness.

Ruskovich proves she’s a talented writer. She weaves the story very slowly, taker her time, with such stunning prose that makes you want to savour every word. However, and although I found it to be mesmerizing and definitely worth picking it up, I’m still not sure I grasped everything this novel has to offer. I believe Idaho is one of those books where you pick up more the more times you read it or maybe it is simply a book that works differently for each reader.