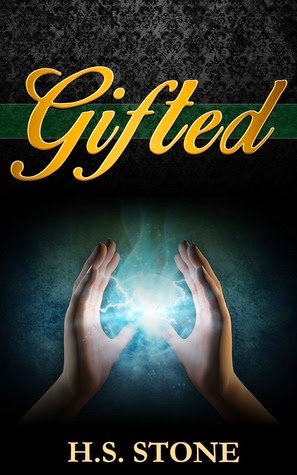 Author: H. S. Stone
Pages (format): 262 pages (e-book)
Publication Date: October 10th, 2014
Publisher: Self-published (CreateSpace)
Summary: “In a kingdom where the Gifteds are captured and thrown into fights to the death, Voima is fortunate that she is just a Regular. However, her brother, Vendd, isn’t so lucky. Since his Power started manifesting itself, the siblings have lived a life on the run, barely escaping the king’s soldiers. Just as Voima and Vendd have settled into a new home, a fleeing Gifted enters their lives, begging for help but bringing soldiers after him. Despite the siblings’ efforts, the soldiers discover Vendd’s Power. Now Voima, an outmatched Regular girl, must find a way to defeat the kingdom’s most dangerous Gifteds in order to save her brother from certain death”.

When H. S. Stone contacted me to see if I was interested in reading his book I read the premise and thought “this is fantasy mixed with some Roman culture" (with the whole fights to the death thing that very much reminded me of gladiators) and so I accepted to review the book. And I have to thank Stone for letting me read it because I had a blast. It was a fun, fast-paced read and I really enjoyed it.

So, Gifted, follows Voima and Vendd, two siblings that are trying to not get caught by the King soldiers because Vendd is a gifted. You see, society is divided between Regulars, common people, and Gifteds, ones with several powers like super-strength or the ability to heal and things like that. But the problem is that Gifteds are persecuted by the King and his sister who ironically are also Gifteds. If you are caught, then you are imprisoned and forced to fight in a duel with another Gifted until one dies. So when Vendd is discovered and  locked up, Voima, his sister, is only concerned about freeing him.

One of the things I enjoyed most about Gifted was the characters: Voima and Vendd and also other Gifteds that helped Voima out. I could relate to them since page one even though I’ve never had to hide to be safe, and I also despised both King Yolus and Princess Pahia with all my heart because how can you exterminate your own kind? And made a show out of it? And also, some of the powers the Gifteds had were super cool and I very much wanted to have all of them. They could be really handy, especially Vendd’s (he can heal himself). The other aspect I was very grateful for was the writing style. It was very gripping. Since page one I was intrigued and I wanted to know more. And despise being written in 3rd person, which is quite rare lately with all the books written in 1st person, I didn’t mind it one bit. I was okay with it because it was well done. It is also a very short read and therefore, quite fast-paced. Things are always happening and there is not a boring moment and what’s more, it is a standalone so we get a conclusion which is always awesome.

But, there is one inconvenience due to the shortness of the story: the world building isn’t huge. However, I wasn’t bothered by this in any way because what we need to know to get through the story is in it. I just wished it had been a little longer so we could have learnt more about the powers and about these two villains, because despite the fact that there is some explanation as to why they are killing those with powers I wanted a bit more background to them.

Some things were slightly predictable or rather, I predicted them but again, I didn’t care because I was enjoying myself and I wanted to read how Stone would make those things I predicted happen, you know?  With barely 260 pages H. S. Stone tells us a very nice, fast-paced and action-packed fantasy story in which the reader can not only relate to the characters but also feel involved into the narrative. As previously mentioned, I wouldn’t have minded a bit more background but overall I’m pretty satisfied with what I read and I would definitely recommend this, especially for those who are trying to get into fantasy or want to because it is very easy to follow, not confusing at all and short.