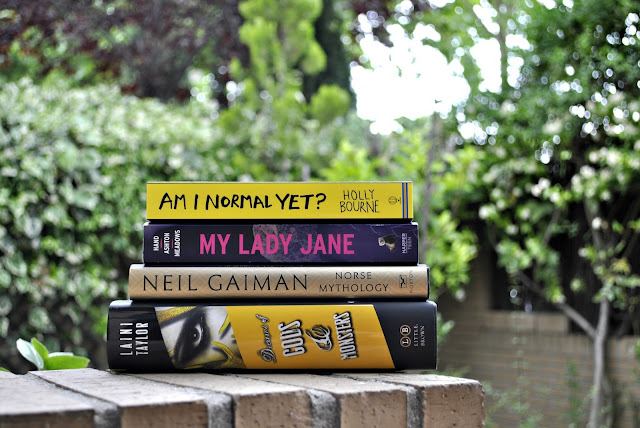 May comes at an end today and I couldn't be happier. It started fine because you know, Sense8 came back and season 2 was spectacular but it also broke my heart and I'm hoping we get a third season because otherwise I'll be pissed! Besides that, as a whole, May hasn't been a good month for me. Nothing bad happened but I haven't been in the right mental space. I'm used to May being revision month but this year, I don't know why, I haven't had the motivation I had other semesters. I'm always stressed out but this time around I've also been apathetic and sad. And finals aren't over yet. However, I'm gonna try my best and just beat my own brain.

And as I was stressed out, my reading suffered from it. My rule of reading at least 30 minutes each day went out the window and there were days when I didn't open up a book. But I managed to finish 4 books.

Dreams of Gods and Monsters was a complete disappointment. And I still don't understand how the story went downhill for me when I liked the first book in the series so much. The other three reads were nice and fun but nothing else to highlight. Am I Normal Yet? deals with a girl who suffers from anxiety disorder and I think the author did a good job with it but I had problems with how the feminism aspect of it was put into the story. So basically the main character and two friends set up a feminist club where they discuss different issues but I wanted that to expand and it never happened. They talked about it with each other but not others, which I wish they had to be honest.

Norse Mythology by Neil Gaiman was lovely and a great introduction into the Norse Myths but if you are into it, it might be too simple. And the last book I read this month was My Lady Jane which was what I would call a "good mamarrachada" which is basically a "good ridiculous thing" because that's what it is. The authors flip history over and they add a fantastical element to it: some people can turn into animals. The real story goes as this: Edward VI dies and Lady Jane Grey is crowned queen. She is queen for 9 days and then Mary Tudor cuts her head for treason. Simple as that. Poor Jane was just a pawn in a bigger game and she sadly paid the price. The authors decided to tell a different tale and it is funny indeed. I was expecting it to be hilarious because of some reviews I've read but funny is also good.

For June, I don't have much planned. I'm still studying since my last final is on June 7th but after that, you bet I'm gonna just spend my time RELAXING and trying to make the most of my summer. As for reading plans I wanna get into The Good People by Hannah Kent because it is the last title in my Spring TBR and I wanna read it before picking the 5 titles for my Summer TBR.

What about you? Any special plans?