April 30, 2015
April is over. Like, what is life? I hate May…. I’m sorry, it’s nothing personal but May is “exam-month” for me and it’s not fun. You will see me complain soon enough on both here and twitter once the dreadful exam dates approach… in the meantime, today’s post is dedicated to what I’ve read in April and a few more stuff because it’s nice to share a bit more than just books, innit?

April was a good reading month for me. I’ve read 11 books (one on my phone, and that’s why is not in the picture… oops!) and some were nice and others were a disaster, let me tell you, but I’m still quite happy with it. I also took part in the Dewey’s 24 Hour Readathon for the first time and I had a lot of fun, truly. The biggest part of my reading was done the first two weeks of April. I picked a book right after the other; my mood at the time allowed it but then, something happened, which I would fangirl about later so stay tuned! I’m gonna try and be short about this and tell you my rating and why in a few sentences or so. I do have planned a few full reviews for some of these books but I haven’t got the time to write them down yet. I will post them in the next couple of weeks. Here we go! 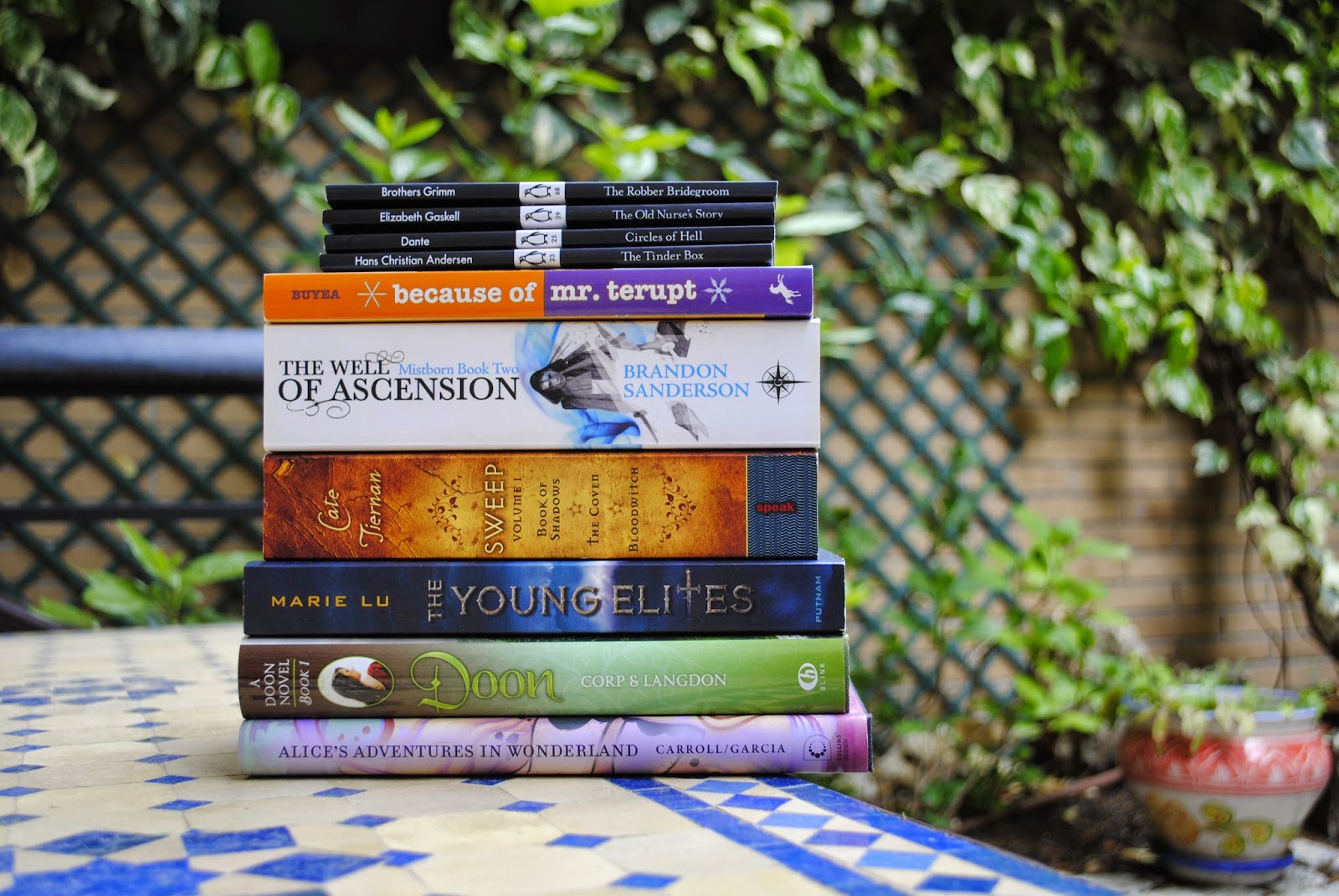 - Doon by Carey Corp & Lorie Langdon. I gave this book 1 star. It frustrated me to no end. I liked the first 100 pages or so but then everything went downhill. I wished with all my heart for this book to be over. I even considered DNFing it, which I never do. Anyways, my reading month didn’t start very well :/

- Book of Shadows by Cate Tiernan. Second 1 star rating of the month… I was on a roll! I knew this wasn’t gonna be the greatest read every, yes, but it was more horrible that I’d thought it would be. I had a bind-up of the first three books but I just read the first one. It was enough for me.

- Alice’s Adentures in Wonderland by Lewis Carrol. This was a re-read for me even though the first time I read it I was a kiddo. This story is weird, yet so fascinating. I do plan on writing a full review so you’ll have to wait to know all of my feelings towards it but I gave it 4 stars.

- The Robber Bridegroom by Brothers Grimm. My first Little Black Classic and it had 7 short stories. Some were better than other but as a whole it was fantastic. Taking into account all the rating, the average rating was 3.6 stars.

- The Well of Ascension by Brandon Sanderson. This book, guys, this freaking book left me speechless. There were some slow parts within the story but then the twists and the ending blew my mind and I can’t even. I. CAN’T. EVEN. 4.5 stars, no doubt.

- The Tinder Box by Hans Christian Andersen. Again, another Little Black Classics. These editions are the cutest thing ever and so easy to read. As well as The Robber Bridegroom, this included 7 tales. It’s my first time reading Andersen and I have to say most tales were pretty darn disturbing. I do wanna read more of him. And once more the average rating was 3.6 stars.

- Playing Mrs. Kingston by Tony Lee Moral. I received this book for review. It was a very nice read and I gave it 3.5 stars. All my thoughts have been written down on a full review which you can check out HERE.

- The Young Elites by Marie Lu. I don’t wanna say much because I intend to write a full review explaining my reasons for my rating, which was 2.5 stars. It’s not like it’s a bad book, but it completely failed to impress me.

- The Old Nurse’s Story by Elizabeth Gaskell. This has two short stories. One is a pretty good gothic tale, which I rated it 4 stars; and the other one is a tale about a party that gathers a lot of well-known fairytales and I gave it 3 stars. The average rating is 3.5 stars.

- The last book of the month was Circles of Hell by Dante. It is a bunch of Cantos from Inferno and this is probably why I didn’t enjoy it as much as I would have wanted to. The writing and the story of the fragments are very powerful and rich but I need to read the whole book now. I gave it 3 stars.

As you’ve probably noticed, I haven’t talked much about the Little Black Classics and that’s because I do plan on reviewing all of them. I will include two books in each review but if you wanna know more, you can always ask me below :)

And as I mentioned before, during the middle of April something happened that made me stop reading altogether….

You may, or may not, have heard about a Netflix show called Daredevil and jeez, it took over my life. I watched the entire first season in like 3 days and I’m re-watching it again because it is wickedly AMAZING. The set, the story, the actors (the casting did an awesome job, just so you know….) and if you like superheroes, GO WATCH THIS. You won’t be disappointed. It is also incredibly dark and more violent than any Marvel movie I’ve seen and I quite enjoyed that aspect. It’s raw and intense and emotional and a very human show. Also, something very funny happened. I dreamt about the show being renewed and weird enough, I woke up the next day to the news of the show renewal. It made my day! If you wanna fangirl about it below, feel free.

Also, we have to talk about Vikings! The third season ended last week and I almost had a heart attack. The plot twist at the end was impossible to guess. It's true this season hasn't been my favourite of the three but I have enjoyed it a lot. Can't wait for season 4! Shit is gonna get even more real.

And finally, Game of Thrones. I wasn't very sure about watching it because I know they're gonna change so much from the books (which is understandable because GRRM is NOT writing) and I hate changes. So far, only 3 episodes have been legally aired and I have my doubts about certain stuff. I loath most of the changes but there is one, which I won't say due to spoilers, that got me very happy because I was anticipating it. When it happened, I danced. My sisters were horrified by it (the dancing, not the plot change LOL).

ALL MY APRIL POSTS:

For more bookish updates, you can add me on Goodreads!