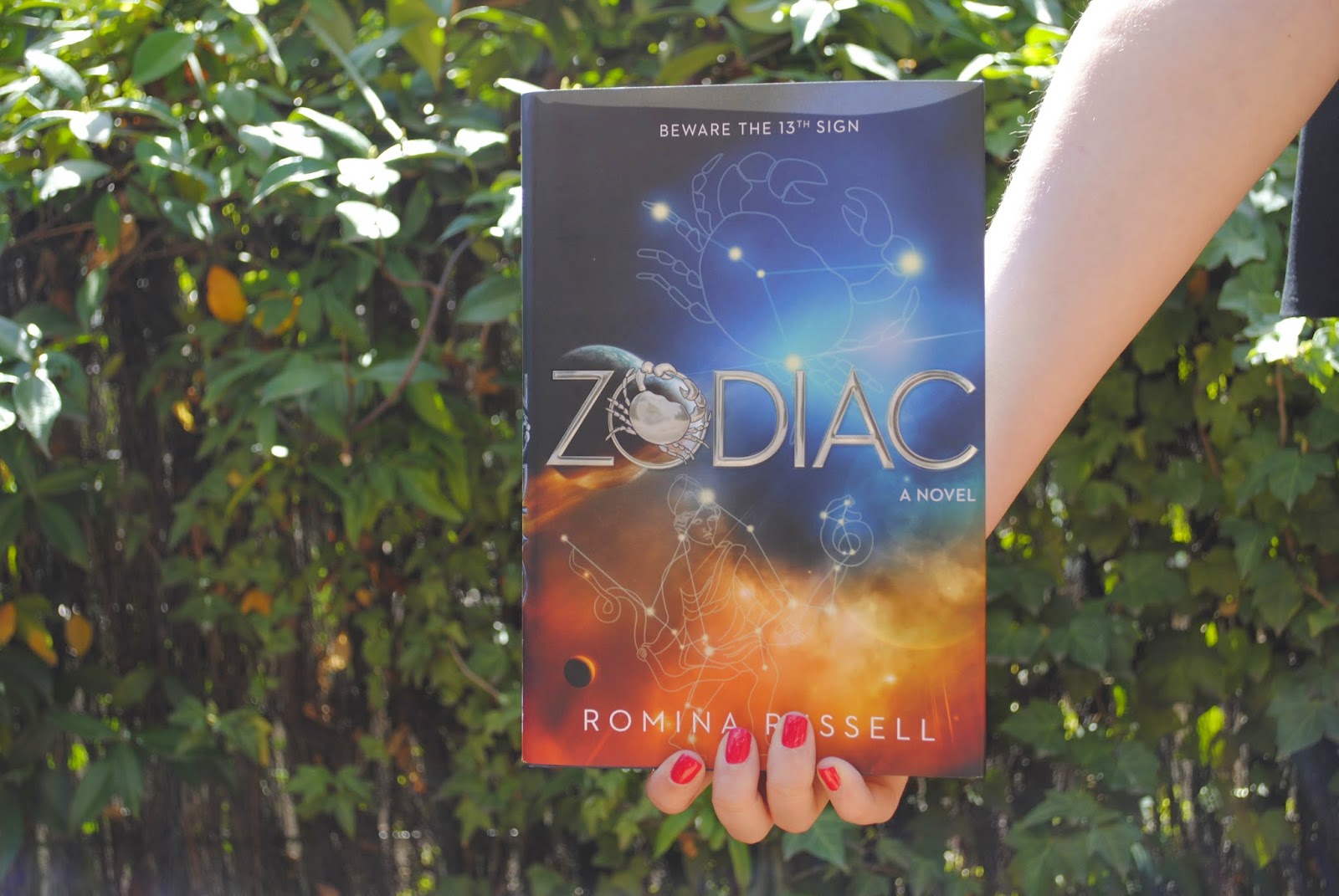 Zodiac by Romina Russell {Goodreads}
Published by Razorbill in 2014
Hardcover edition; 336 pages {BookDepository}
"Rhoma Grace is a 16-year-old student from House Cancer with an unusual way of reading the stars. While her classmates use measurements to make accurate astrological predictions, Rho can’t solve for ‘x’ to save her life—so instead, she looks up at the night sky and makes up stories. When a violent blast strikes the moons of Cancer, sending its ocean planet off-kilter and killing thousands of citizens—including its beloved Guardian—Rho is more surprised than anyone when she is named the House’s new leader. But, a true Cancerian who loves her home fiercely and will protect her people no matter what, Rho accepts. Then, when more Houses fall victim to freak weather catastrophes, Rho starts seeing a pattern in the stars. She suspects Ophiuchus—the exiled 13th Guardian of Zodiac legend—has returned to exact his revenge across the Galaxy. Now Rho—along with Hysan Dax, a young envoy from House Libra, and Mathias, her guide and a member of her Royal Guard—must travel through the Zodiac to warn the other Guardians. But who will believe anything this young novice says? Whom can Rho trust in a universe defined by differences? And how can she convince twelve worlds to unite as one Zodiac?"


Zodiac tells the story of Rho, a girl from House Cancer and how her world crumbles down when a powerful and unidentified force starts destroying not only her House but the other 11 across the Zodiac. Would the Houses be able to set aside their differences and fight together as one?

I had such high hopes for this one. I wanted to love it like everyone else but sadly, I didn’t. And I’m devastated because Zodiac had a lot of potential. As soon as I read the blurb I wanted to read it and then reviews started to pop up and my expectations hit the moon. Then, what went wrong? The characters, or shall I say, the main character. I couldn’t connect with her; and since she’s the one telling the story my detachment also transferred to the rest of the characters and the story as a whole. Therefore, I was reading without really reading. I pushed myself to finish it because you know I don’t DNF even though I thought about it. Also, I felt like Rho didn’t show her emotions during the story. She tells the reader how she’s feeling alright but those feelings aren’t reflected in her actions. She’s like: “oh, I’m so sad” but the reader, or rather I, don’t feel it that way. She had to specifically say it for me to know and that’s a total shame.

Besides the characters, there were some other factors which also made me dislike the book. The first one was the info-dumping. Okay, it is understood that when dealing with a new world the author has to explain everything to the readers and doing that nicely is one of the hardest task to do and is not always done right. The world in Zodiac is incredibly vast; the author basically has to explain the different cultures of 12 Zodiac Houses and that is one hell of an explanation so inevitably the dreadful info-dumping shows up. When explaining the world, I like when the author goes little by little. Bit of info here and there. However, with Zodiac almost all pages had information and instead of having a vivid image of the world, I couldn’t retain most of the details which made my reading experience quite dull.

The second and final factor that got me eye-rolling for most part was the completely unnecessary love triangle. It didn't add anything to the story in my opinion. Well, without taking into account my frustration, of course. I hate love triangles. Like insta-love I find them entirely unrealistic and in most YA books they are either written pretty awfully or are utterly flat. It seems now that you need a love triangle in order to write a YA book, because you know, having two people falling in love is out of style. Better to add a third individual and make the female main character moan over both guys like she has nothing better to do.

So, yes, another hyped book that lets me down. As always, with my reviews I’m stating why I liked/disliked a book but that doesn’t mean you would like/dislike it as well. If you feel interested in reading Zodiac, then go for it. Sadly, I will not continue reading this trilogy.