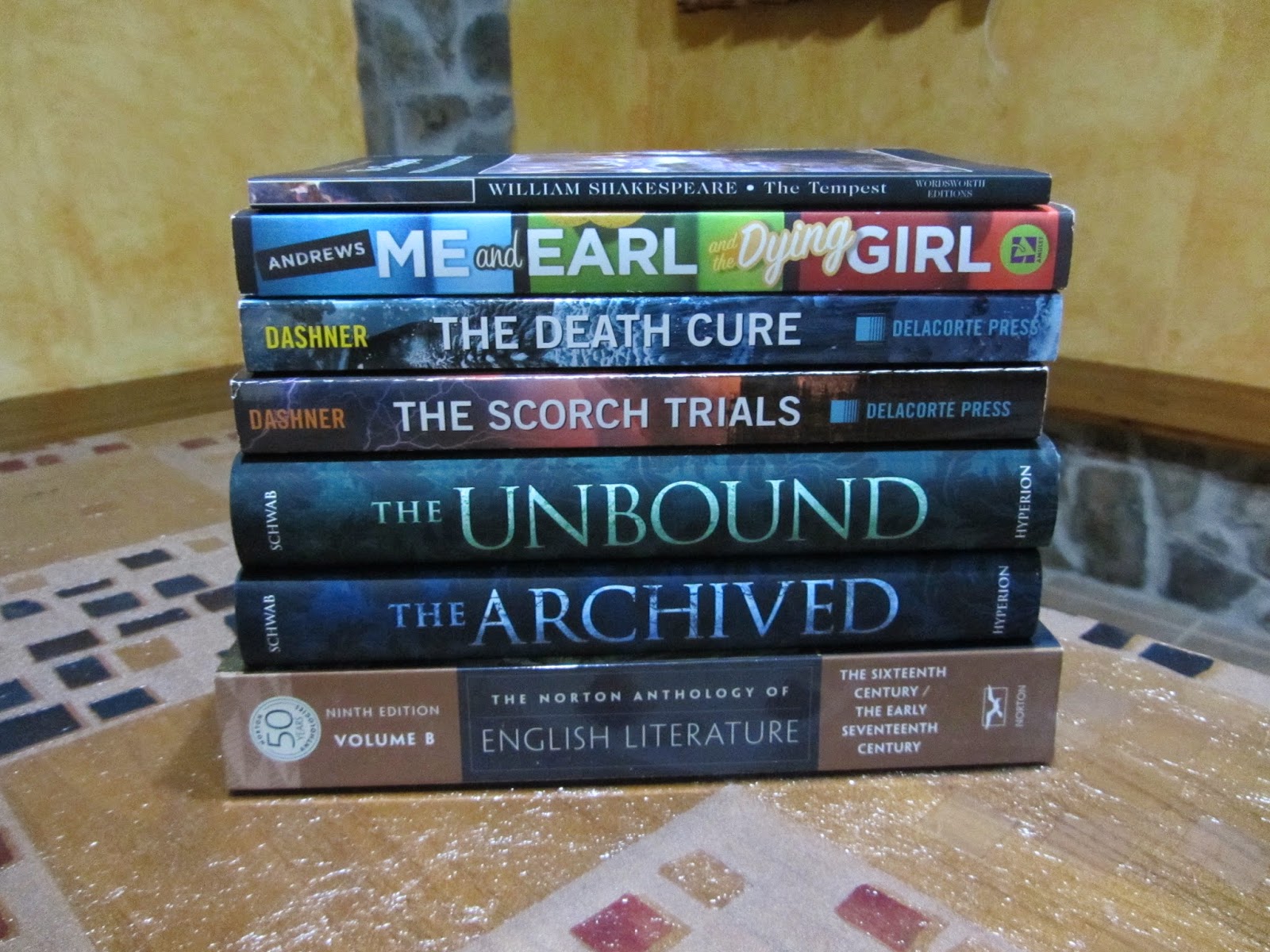 This month I've read a total of 7 books, two of them because of my Literature English class.
Here is the list:

1. The Scorch Trials by James Dashner


2. Death Cure by James Dashner
3. The Tempest by William Shakespeare
4. The Archived by Victoria Schwab
5. Me and Earl and the Dying Girl by Jesse Andrews
6. Volpone by Ben Jonson (included in the Norton Anthology of English Literature)
7. The Unbound by Victoria Schwab

March has been actually a great reading month despite spending a week without opening any book. But I will tell you about all 7 books one by one.

My first march pick up was The Scorch Trials by James Dashner. I read The Maze Runner back in February and I loved it so much that I decided to read this one. I liked it fair enough but there were some parts in the middle of the book that were a bit boring. But again it was fast-paced and mind-blowing, specially the ending. Dashner, your epilogues kill me, always. I gave it 4 stars on Goodreads.

So, after finishing The Scorch Trials I couldn’t wait any longer and I picked up The Death Cure, the 3rd and last installment of the maze runner trilogy. I enjoyed it. I wish some things would have ended differently for certain characters but the way this book ended, in general, was fine with me. A little bit depressing but I am okay with that. I gave it 4 stars on Goodreads.

And then, University got in the way and I had to read The Tempest by William Shakespeare. And I have to say is that I really enjoyed this play, maybe it’s because of the hippie feeling I got at the end of it, kind of like ‘don’t worry, be happy’. I read this in a day, and that’s a record because I always dedicate 3 or even 4 when it comes to my Uni reads just to make sure that I understand the whole thing. I gave it 5 stars.

If you, like me, watch Booktubers you would probably know that during March there was a read-a-long. The chosen book was The Archived by Victoria Schwab. I bought the book in November, 2013 so this read-a-long gave me the perfect opportunity to read it and OMG! I freaking loved it. The plot was so original and the characters very likeable. The atmosphere of this book is really unsettling which was at the same time scary and perfect. And I gave it a well deserving 5 stars.

My next reading was Me and Earl and the Dying Girl. And I got trouble getting through this book not because it was bad, actually is a very original book and even though is about cancer, it is not sad. Is quite funny, to be honest. What was the problem, you would wonder: Teen Wolf. My sister got me hooked on it so I left everything I was doing and I dedicated a week of my life to watch every episode available to prepare myself for the season 3 finale. And after that I picked it up again but I didn’t feel like reading. It was like I was suffering a little reading slump so I forced myself to finish the book. Thereby I couldn’t rate it because it wouldn’t be a fair one.

The next thing I read was Volpone by Ben Jonson. I did not like this, at all. It is supposed to be a comedy but I didn’t find it funny, rather boring. I gave it 2 stars because of the moral message at the end.

And my final read for this month was The Unbound by Victoria Schwab. After finishing The Archived I could not resist myself and I went straightaway to Amazon and order the second book. And as expected, I loved it. I just love the way the story flows and how the characters develop and everything comes into place at the end. But I will say this: a third book is needed. That ending demands it, as soon as possible. If you couldn’t already guessed my rating it was 5 stars.

That’s it for March! Let’s see what April has in store for =)

Find me on Goodreads !