Book Review // All the Light We Cannot See by Anthony Doerr 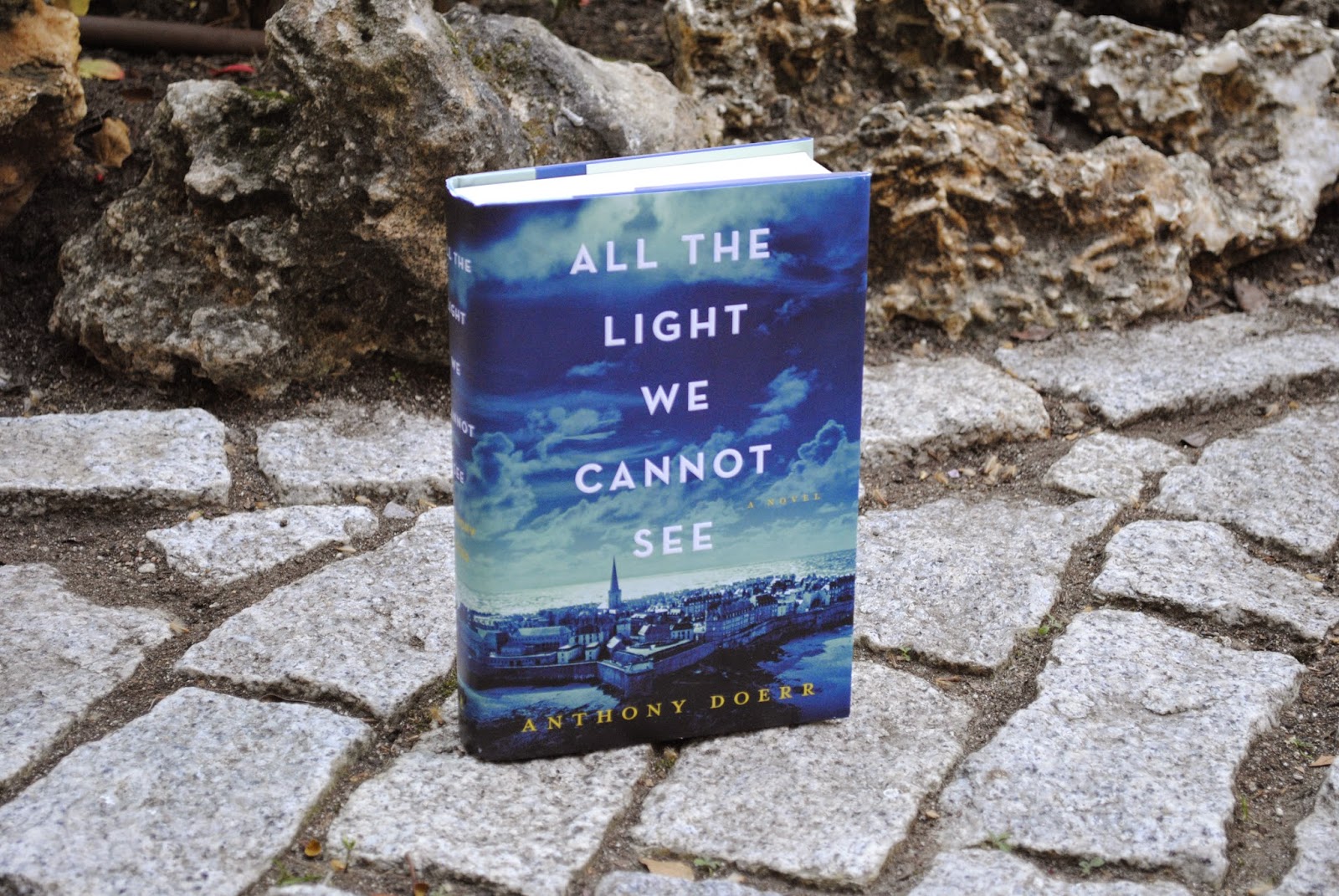 All the Light We Cannot See by Anthony Doerr {Goodreads}
Published by Scribner in 2014
Hardcover edition; 531 pages {BookDepository}
"Marie-Laure lives with her father in Paris near the Museum of Natural History, where he works as the master of its thousands of locks. When she is six, Marie-Laure goes blind and her father builds a perfect miniature of their neighborhood so she can memorize it by touch and navigate her way home. When Marie-Laure is twelve, the Nazis occupy Paris, and father and daughter flee to the walled citadel of Saint-Malo, where Marie-Laure’s reclusive great-uncle lives in a tall house by the sea. With them they carry what might be the museum’s most valuable and dangerous jewel. In a mining town in Germany, the orphan Werner grows up with his younger sister, enchanted by a crude radio they find. Werner becomes an expert at building and fixing these crucial new instruments, a talent that wins him a place at a brutal academy for Hitler Youth, then a special assignment to track the resistance. More and more aware of the human cost of his intelligence, Werner travels through the heart of the war and, finally, into Saint-Malo, where his story and Marie-Laure’s converge."

“War is a bazaar where lives are traded like any other commodity: chocolate or bullets or parachute silk.”

I’ve been staring at my computer screen trying to come up with coherent words to write this review for like two hours and I’m still pretty sure that anything I’ll write would do justice to the book. It’s so hard to try and write down my feelings towards All the Light We Cannot See because there are so many things that will be left out.

“Open your eyes and see what you can with them before they close forever.”

Many people have compared it to The Book Thief, saying All the Light We Cannot See is for adult(ish) audiences and it’s true they share the same vibe – after all they are both based on the same war; but the story is completely different. We follow two main characters, Marie-Laure, a French blind girl who lives in Paris with her father; and Werner, a German boy whose great skills with “technology” earns him a place at Hitler Youth. Through the course of the War, both stories intertwine.

“To shut your eyes is to guess nothing of blindness. Beneath your world of skies and faces and buildings exists a rawer and older world, a place where surface planes disintegrate and sounds ribbon in shoals through the air. Marie-Laure can sit in an attic high above the street and hear lilies rustling in marshes two miles away. She hears Americans scurry across farm fields, directing their huge cannons at the smoke of Saint-Malo; she hears families sniffling around hurricane lamps in cellars, crows hopping from pile to pile, flies landing on corpses in ditches; she hears the tamarinds shiver and the jays shriek and the dune grass burn; she feels the great granite fist, sunk deep into the earth’s crust, on which Saint-Malo sits, and the ocean teething at it from all four sides, and the outer islands holding steady against the swirling tides; she hears cows drink from stone troughs and dolphins rise through the green water of the Channel; she hears the bones of dead whales stir five leagues below, their marrow offering a century of food for cities of creatures who will live their whole lives and never once see a photon sent from the sun. She hears her snails in the grotto drag their bodies over the rocks.”

Anthony Doerr’s prose is astonishing. Full of tropes that make the story even more beautiful, haunting and yes, sad. I won’t deny it was difficult sometimes. The imagery so complex, it was hard to grasp. Don’t worry; you get used to it. And then you just lose yourself in the story and let the characters get beneath your skin and oh, after that, you’re doomed. And by that I mean you cry. A lot. Or maybe not. Depending on how emotional you get or if you’re a crier, which I definitely am. I’m not ashamed of that. Speaking of the characters, you bet they will stay with me; I finished the book 5 days ago and I’ve tried to read anything but nothing gets my attention. Hello there, book hangover! Marie-Laure is such a sweet girl fascinated by words and stories; once the Paris invasion begins she’s forced to leave the city and go to the country side to live with her Uncle Etienne, a First World War veteran, who has ghost of his own. Werner is battling with himself; knowing that what his own people are doing is wrong but being unable to do anything about it and just following out the rules like everyone else.

“I have been feeling very clearheaded lately and what I want to write about today is the sea. It contains so many colors. Silver at dawn, green at noon, dark blue in the evening. Sometimes it looks almost red. Or it will turn the color of old coins. Right now the shadows of clouds are dragging across it, and patches of sunlight are touching down everywhere. White strings of gulls drag over it like beads.It is my favorite thing, I think, that I have ever seen. Sometimes I catch myself staring at it and forget my duties. It seems big enough to contain everything anyone could ever feel."

Finally, the pace. Here comes the tricky part. It is a slow book with very short chapters – some not even longer than one page – which creates a fast-pace illusion. I, as a reader, have normally no problems with slow-paced books; I prefer them even. I was so invested in the story that I just kept turning the pages whenever I had the time to read.

“Don’t you want to be alive before you die?”

As mentioned before, this review does not capture all my feelings towards the story. It’s true what they say about writing positive reviews; sometimes words aren’t enough. So a piece of advice here: if you were thinking about reading All the Light We Cannot See, don’t think it twice. Read it. And if you enjoy historical fiction, follow the same rule. It’s gonna take a while until I can let this book go and I’m not sure I ever will.