Looking for Alaska by John Green 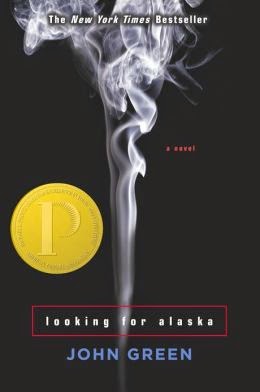 "Before. Miles "Pudge" Halter's whole existence has been one big nonevent, and his obsession with famous last words has only made him crave the "Great Perhaps" (François Rabelais, poet) even more. He heads off to the sometimes crazy, possibly unstable, and anything-but-boring world of Culver Creek Boarding School, and his life becomes the opposite of safe. Because down the hall is Alaska Young. The gorgeous, clever, funny, sexy, self-destructive, screwed-up, and utterly fascinating Alaska Young, who is an event unto herself. She pulls Pudge into her world, launches him into the Great Perhaps, and steals his heart.

After. Nothing is ever the same."

John Green did it again! But this time he didn’t left me completely depressed, just a little bit really. This book follows Miles “Pudge” Halter and his adventures, if we can refer to them as such, when he decides to transfer to the boarding school his father attended. There he befriends his roommate, the Colonel, and thanks to that he meets Alaska and quickly falls in love with her.

I didn’t know anything about this book when I decided to pick it up, only that it was a John Green book and therefore I knew I will have to deal with some feels. Since the beginning I felt a The Catcher in the Rye sense to it but even though Looking for Alaska has some similarities with Salinger’s book it has a more “optimistic” vibe to it, at least for me.

With an overwhelming energy and a main plot that discusses a lot of “taboo” issues surrounding teenagers, this novel makes the reader wonder about life and human nature as a whole and how people deal with their problems when facing certain situations.

It will make you think (a lot) and even though the questions it could bring up could be tough to answer (not just because you may not have a straight answer for them but because maybe you are not ready to answer them yourself) it is still a delightful story, difficult to forget. I will say this though: I do want to go and search for my "Great Perhaps" even if it means I can't get out of the "Labyrinth of Suffering".