December 01, 2014
November is over and there is only one month left before 2014 is over. I’m still trying to not think about it. Anyhow, this month I’ve read 11 books. Don’t ask me why, because I don’t know. I did participate in a read-a-thon but that still does not explain why I’ve read this much. Honestly, is still a mystery to me taking into account I’ve been quite stressed with Uni work. 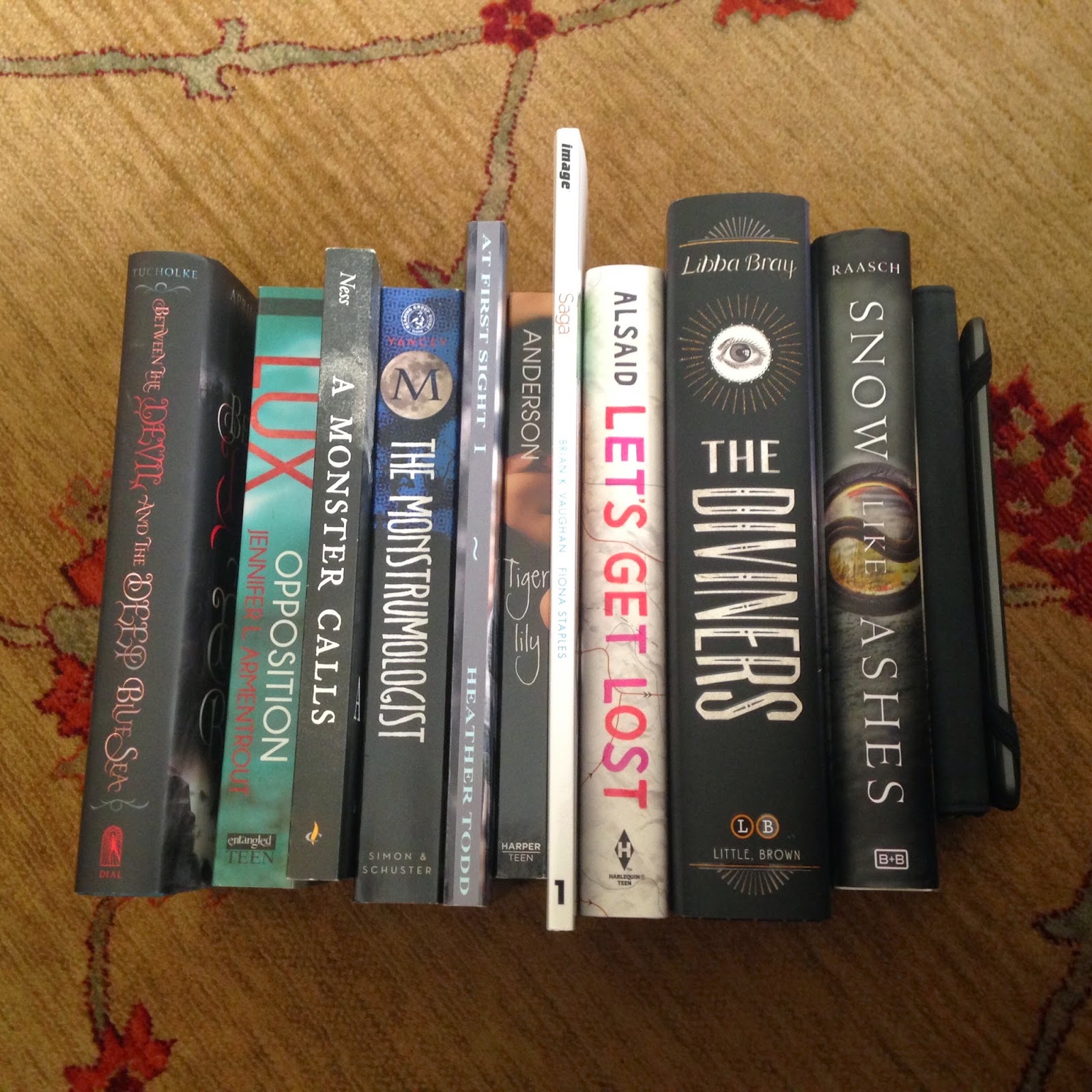 1. Between the Devil and the Deep Blue Sea by April Genevieve Tucholke
2. Opposition by Jennifer L. Armentrout
3. A Monster Calls by Patrick Ness
4. At First Sight by Heather Todd
5. The Monstrumologist by Rick Yancey
6. Tiger Lily by Jodi Lynn Anderson
7. Saga vol. 1 by Brian K. Vaughan
8. Let’s Get Lost by Adi Alsaid
9. The Diviners by Libba Bray
10. Hearts to Follow by Dana Burkey
11. Snow Like Ashes by Sara Raasch

My first read of November wasn’t, let’s say, spectacular. I actually gave Between the Devil and the Deep Blue Sea only 1 star. Everything about that book infuriated me: the characters, the insta-love and well, I saw no purpose whatsoever for the story. It’s true the writing style was quite fluid and I read it pretty quickly but it was not good in my opinion. I’m not gonna read the second and final book so if anyone out there want to spoil it for me, you’re welcome.

Then I decided to finally finish the Lux series and I gave Opposition 4 stars. It was a good conclusion but there was way too much cheesiness for my taste and some things were too rushed in my opinion. Still, I liked it and I think the Lux series is a nice paranormal read and Jennifer L. Armentrout writing style is incredibly addictive so it’s almost impossible to put down her books.

And then, I went ahead and pick up A Monster Calls and this one is gonna make it to my Top Ten Book of 2014 list because it was so incredibly good! I read it in like 2 hours and at the end I was crying like crazy. I’m not even kidding. I did a full review so you can check it out here. I gave it 5 stars.

While reading The Monstrumologist, I wasn’t really feeling it and so I decided to read something very short and light and gods help me I read At First Sight. It was everything I dislike about YA, it wasn’t even realistic and I know the author herself said that it was supposed to be unrealistic and even so this book was not good. The writings style was very childish and repetitive but hey, it was short and I read it pretty quickly. Initially I gave it 2 stars but I changed it to 1 star because it was even more ridiculous than Between the Devil and the Deep Blue Sea. After that I finished The Monstrumologist and I gave it 3 stars. It wasn’t a bad book, it was alright hence the 3 stars but I had problems with it. One of those was the writing style, it was captivating enough for me and I didn’t pay attention to the plot sometimes. In addition to that, the entire plot of it was a bit confusing. I didn’t know where the story was going until the end and I wasn’t really impressed with it. I had no problems with the characters though. Oh, and also even though this is a horror book most of the time I couldn’t help but laugh out loud, especially at the beginning. It was so weird…. As the story progresses the descriptions became more gruesome though and I was happy about that.

Later, I decided to participate in the “24in48” Readathon. I read Saga vol. 1 and Tiger Lily. The first one was my very first graphic novel and it’s definitely not gonna be the last. It was the weirdest thing I’ve ever read but it was good, so good. I gave it 4 stars. But Tiger Lily was another thing… it let me down. I love retellings and Peter Pan is one of my favourite tales so I was so eager to read how Jodi Lynn changed the story. My main problem and the reason why I gave it 3 stars was that I didn’t feel any kind of connection with any of the characters. I was just a mere observer but I had no bond with anyone. I don’t like when that happens, so I was a bit sad after reading it.

Two hours of so before the “24in48” Readathon finished I picked up Let’s Get Lost and because I knew what to expect from this one I actually really enjoyed it; I knew it was cliché and full of stereotypes but I didn’t affect my reading experience. The writing style is what I love the most; it was simple and clear but quite beautiful. Oh, and this one has an ambiguous insta-love. The way it was written? I was happy with because it didn’t feel like insta-love for me and I’m still deciding if I would describe it as insta-love. I thought it was more like instant attraction, not love. Anyway, I gave it 3.5 stars.

The last three books I’ve read I did write a full review about them so I’m not gonna say a lot. The Diviners disappointed me quite a bit, you can read why here, and I ended up giving it 3.5 stars. Then Dana Burkey sent me a copy of her book, Hearts to Follow, which was a collection of three novellas that were very cute and fun to read. I gave it 4 stars and here is the review. The last book I’ve read this month was Snow Like Ashes and I’m so happy I did because I loved it to pieces! I wanted to read this one since June and I was afraid about being disappointed but I wasn’t and that’s why instead of giving it 5 stars I gave it 6 stars because I felt so incredibly good while reading this one and I was happy it didn’t let me down. The full review here.

That’s everything for November. I’m not sure what I’m gonna be reading in December. I’m starting Shadow and Bone by Leigh Bardugo. I’m buddy-reading it with Sarah @ BookishRetreat and I hope we both like it :)

What have you read this month? Have you read any of the books I’ve mentioned? Did you like them? Or not?