Book Review // The Improbability of Love by Hannah Rothschild 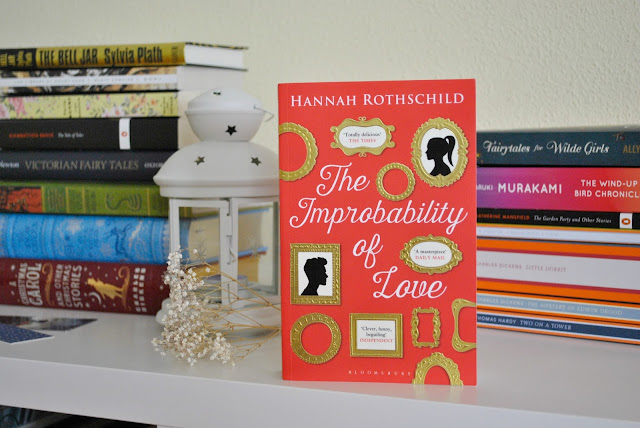 The Improbability of Love by Hannah Rothschild {Goodreads}
Published by Bloomsbury in 2016
Paperback edition; 479 pages {BookDepository}

The Improbability of Love follows a bunch of different characters all involved in different ways with the art-world scene in London when a very famous painting –which gives name to the novel – is found by Annie, the main protagonist we could say, in a thrift shop. Don’t be fooled by the cover which screams chick-lit through and through; the novel deals with so much more.

The structure of the book goes back and forth, switching points of view constantly. There were too many characters for my taste and sadly, not all of them well developed. However, I will say the most enjoyable parts were the ones in which the painting speaks to the reader because she’s witty, self-centered, bigheaded and highly opinionated and it works so well. She takes us through an “art journey” with her fantastic remarks and if it wasn’t for those relief moments I would have given up half-way through.

I have to admit the beginning set the tone greatly thanks to a mystery that isn’t solved until the end but that’s about it. The story goes downwards after that and not even the mystery is enough to keep reading (only the painting chapters made me turn the pages). The story as a whole and its resolution felt flat. I wasn’t impressed basically. The other problems I had involved the writing style and the pace. It was as if the author was trying to hard and on top of that, the novel never finds a steady pace and makes the reading experience a tedious one.

The Improbability of Love is getting both negative and rave reviews and based on my reading I would not recommend it but maybe, it might be a story for some of you. There are also a lot of food descriptions, besides the focus on art, which is always nice because who doesn't like food?