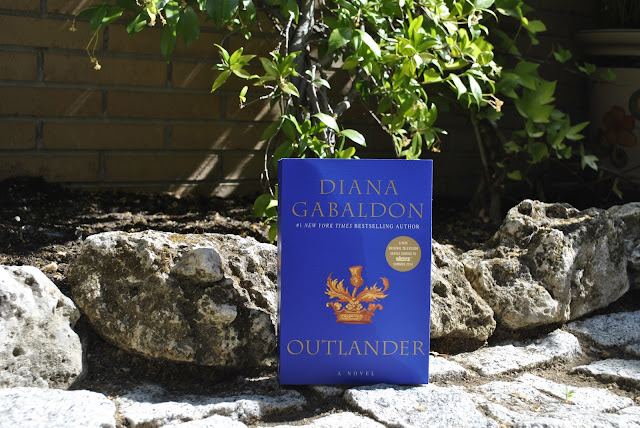 1945. Claire Randall is in Scotland, enjoying a second honeymoon with her husband Frank Randall after the Second World War, when she touches some standing stones and finds herself in 18th century Scotland. She doesn’t understand what happened to her or why for that matter but she knows she has to survive in a very tumultuous period.

I feel everybody and their mother know already about Outlander, either the books or the TV show and if you don’t, well… have you been living under a rock? I knew about the show even before it premiered because I’m a huge fan of Tobias Menzies (Frank/Jack Randall). However, I watched some episodes first before deciding if I wanted to read the books. I liked what I saw and so when they went into hiatus I told myself I was gonna pick up the book and read it. I didn’t. Until now. And honestly, I’m glad I waited a bit longer.

The craziness that followed the show was insane and of course, with that, comes the hype and I tend to be disappointed by hyped up books. Now though there are both positive and negative reviews and thanks to that I had no expectations whatsoever. And I had a great time reading this. It was beautiful and painful at the same time. It’s very much focused on the characters and their lives so if you like character-driven novels then give it a go. But it does have as well its dose of action, which by the way it’s very well written and thank goodness, not confusing at all.

Regarding the writing style, I have to say I personally enjoyed it because it matches Claire’s personality in my opinion. She’s a very pragmatic woman, quite rational and so it’s the writing style. Sometimes I was confused as to why she wasn’t losing her wits over having travelled to the past –let’s face it, if it had happened to me, I would have completely lost it. It was as if she was very “relaxed” with the situation and keeping a clear head around everything. But that’s how Claire is. Of course there were moments when she collapsed emotionally, I mean she’s human, but for most of the time she kept her cool.

Outlander is not just a historical fiction novel, it’s also a romance and it has a lot of steamy scenes. Gabaldon doesn’t hold back so if you’re not comfortable with explicit sex scenes don’t pick it up. I personally have no problem with those. However, I might say I did have some issues with Claire and Jamie’s relationship. Let’s face it, it isn’t perfect and pretending it to be so it’s problematic in itself. I understand the time period we’re dealing with and I know the image they had of women back then but there were a lot of times when I felt like Jamie was forcing Claire and romanticizing that kind of behaviour would be a huge mistake. There are many moments during the story, not only when they are having sex, when I saw this problematic behaviour and although I did enjoy the book, we can’t leave this out of the conversation. I think it’s important to recognize this for what it is.

All in all, I do recommend this if you enjoy historical fiction, are intrigued about Scotland and don’t mind romance. It is a slow but steady read and I plan to continue reading Claire story.