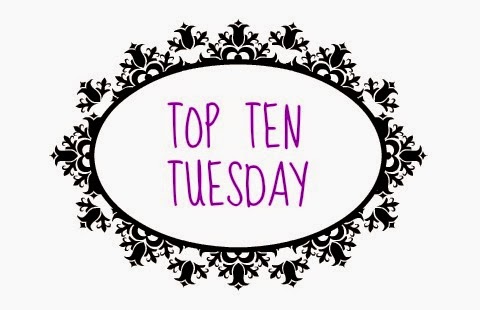 After a long time without doing a Top Ten Tuesday I was actually thinking of not doing them anymore but this week’s topic is awesome. I mean heroines? Yes, please! I’ve listed only ten even though I could have listed a whole lot more. They aren’t in any particular order and we have a mix between book and tv shows heroines. Let’s do this!

Rose Hathaway from The Vampire Academy.
Even though the movie was not exactly the greatest adaptation ever and most people would sadly now link the movie and books together I have to say Rose is an absolutely amazing female character. She’s badass and doesn’t like to be ordered around. She’s incredibly loyal and fierce. But that can be applied to most of my picks in the list ;)

Pam from True Blood.
I’m talking about the TV Show here, not the books. Pam is just hilarious. So witty and dry and she’s, alongside Eric, why I kept watching the show. She’s really a boor but so sarcastic that it’s impossible not liking her.

Jane Eyre.
Many would find this pick weird but if you’re read the book you may understand why I picked her. Taking into account both the time period in which Jane lived and the decisions she made, she is indeed a heroine. Always true to herself and always speaking her mind. I have so much respect for this character.

Isabelle Lightwood from The Mortal Instruments.
Oh dear, this woman. I would have preferred her as the main character, rather than Clary. At the beginning she was a bit ruthless towards strangers but you can really tell that she only wants to protect those she loves and she would do that, no matter what. She uses a whip to kill, which is freaking awesome.

Carol from The Walking Dead.
If anyone had told me in season 1 that Carol was going to became one of the most badass female character on TV I would have laughed. She was incredibly weak in season 1 and 2 but holy molly! She did change. Amazing character development and I’ll be incredibly sad if she ever dies, which probably would happen considering this show.

Arya Stark from Song of Ice and Fire.
I have to say both book and tv show Arya are very much alike and I’m very pleased with it. Arya is a very independent character from the very beginning. She doesn’t want to be a lady. She’s a great archer and wants to learn how to use a sword. She’s probably my favourite female character in the series, alongside Melisandre. Arya is different but she likes to be like that. She doesn’t want to blend in; she wants to stand out and be there to protect her loved ones. I’m very much intrigued about her whole storyline because I don’t know where she will end but I hope she gets a nice ending.

Lisbeth Salander from the Millennium trilogy.
This character didn’t have it easy. She goes through a lot and it’s very painful to read not only about her past but also about the many obstacles she has to face along the way. But she’s a badass and extremely intelligent and I’ve always be grateful to Larsson for writing such a complex and outstanding female character.

Allison from Teen Wolf.
She started as the high-school sweetheart and then she became a very annoying character and then she became a warrior and I started liking her again. She was able to protect not only herself but also her family and friends. A very intelligent and intuitive character and to be honest I wouldn’t mind having her archery skills.

Lagertha from Vikings.
If you don’t watch this show, I don’t know what you are waiting for. It’s brilliant! And full of very powerful powers, especially the female ones. Lagertha is a Viking warrior, or rather a badass mortal Valkyrie LOL. She’s the ultimate badass.

Hermione Granger from Harry Potter.
Don’t say you are surprised. Let’s be honest here, if not for Hermione poor Harry and Ron would have never guessed half of the stuff in the books. She’s a Muggle-born but would you think she’s less because of that? Nope. And as both Lupin and Sirious pointed out “she’s the brightest witch of her age” and you can bet she is!

And those are my top ten heroines! What I love about all of them is that they don’t have it easy. They have to fight constantly to prove just how worthy they are. But they don’t give up.