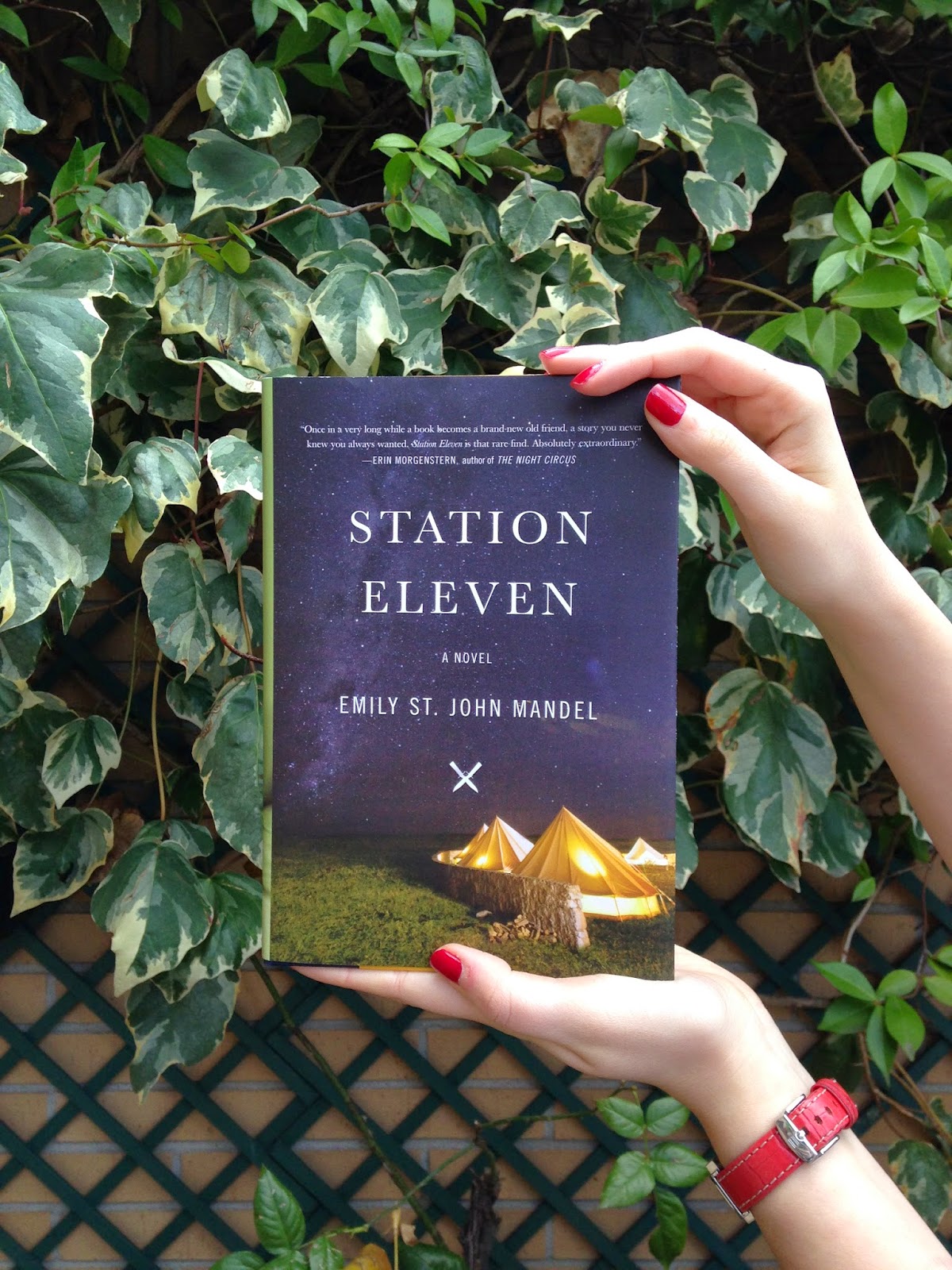 Station Eleven by Emily St. John Mandel {Goodreads}
Published by Knoph in 2014.
Hardback edition; 333 pages {The Book Depository}
"One snowy night Arthur Leander, a famous actor, has a heart attack onstage during a production of King Lear. Jeevan Chaudhary, a paparazzo-turned-EMT, is in the audience and leaps to his aid. A child actress named Kirsten Raymonde watches in horror as Jeevan performs CPR, pumping Arthur's chest as the curtain drops, but Arthur is dead. That same night, as Jeevan walks home from the theater, a terrible flu begins to spread. Hospitals are flooded and Jeevan and his brother barricade themselves inside an apartment, watching out the window as cars clog the highways, gunshots ring out, and life disintegrates around them. Fifteen years later, Kirsten is an actress with the Traveling Symphony. Together, this small troupe moves between the settlements of an altered world, performing Shakespeare and music for scattered communities of survivors. Written on their caravan, and tattooed on Kirsten's arm is a line from Star Trek: "Because survival is insufficient." But when they arrive in St. Deborah by the Water, they encounter a violent prophet who digs graves for anyone who dares to leave".


Under the pretext of an apocalypse, Emily St. John Mandel crafts a novel about the true meaning of being alive and being human. It’s been a while since I’ve read such a powerful and philosophical novel; and I’ve enjoyed it greatly.

"They waited in the shadows at the side of the road, trying to breathe quietly, trying to look everywhere at once. The claustrophobia of the forest. The first few trees visible before her, monochrome contrasts of black shadow and white moonlight and beyond that an entire continent, wilderness uninterrupted from ocean to ocean with so few people left between the shores. Kirsten and August watched the road and the forest, but if anything was watching them back, it wasn’t apparent"

Station Eleven follows several characters that are all connected through one person: Arthur Leander (I swear to you, every time I read Leander I thought of Ollivanders from Harry Potter – I kid you not). He’s a very well known actor who dies from a heart attack when he was on stage performing King Lear. After this incident the world basically collapses when a fatal virus, known as the Georgia Flu, kills 99% of the world population. Reading how the world as we know it ends, it is utterly terrifying. Mandel’s narrative takes you to these final moments; and it is impossible not to feel panicky inside at the thought of an epidemic of such magnitude. The way it’s described, it makes you feel like you’re living it and let me tell you, that’s not a fun experience. Not at all.

"If hell is other people, what is a world with almost no people in it?"

From then on, the storyline jumps 15 years later when the world is no longer a world. People are living like they can; some have settled down in small towns while others keep always on motion. There is anarchy and people do whatever they need to do to survive. It’s like a messy jungle. And what Mandel does with the story is just jumping from the past to the present to tell the story of all these characters and how their pasts intertwine. I would not deny that it can be a bit confusing sometimes since the narrative voices change constantly and the time leaps are not specifically marked; but at the same time, that was what kept me reading.

"Hell is the absence of the people you long for"

Station Eleven is a character-driven novel. Yes, it does have a plot and there is some action but everything is focused on the characters: on their lives, mistakes, deepest longings, fears and what have you. Mandel’s writing style is magnificent but without being overwritten. It’s incredible the variety of emotions the author can make the reader feel while reading: fear, angst, solitude, hope… and all this leads me to talk to you about the (sort of) antonymous game within. What I mean is that indeed the world is completely changed and the characters wonder with great grief so many times what will have been of their loved ones but, at the same time, there is always this spark of hope that things will get better. For me, this combination of both hope and despair was astonishingly beautiful and it really made me think. Regarding the pace, I would describe it as periodic; very regular. There were some slow parts, true, but in general the book is read very fluently. In fact, I was so invested in the story that I wasn’t even conscious of turning the pages. I kept reading and reading; only stopping when I had things to do and not because I wanted to stop.

My one and only problem with the novel is the ending. Let me explain. Not the ending itself but the way some stories came together. I thought it was gonna be incredibly mind-blowing but it was not, at least for me. However, that doesn’t mean is bad or anything, it’s just not what I was expecting but I liked it nonetheless.

In short, Station Eleven is a remarkably sophisticated novel, which battles between hopelessness and the possibility of a light at the end of the tunnel. The story itself can be a little disturbing because the way people behave in this post-apocalyptic world doesn’t differ too much of the way some people behave nowadays, but the writing ability of Mandel to write about human nature is outstanding.

What would you do if the world ends?