February 28, 2015
February has gone in no time and I can’t believe is almost March. In February I read 8 books. Woo Hoo! Still trying to figure out how I did it though with all the exams at the beginning of the month. 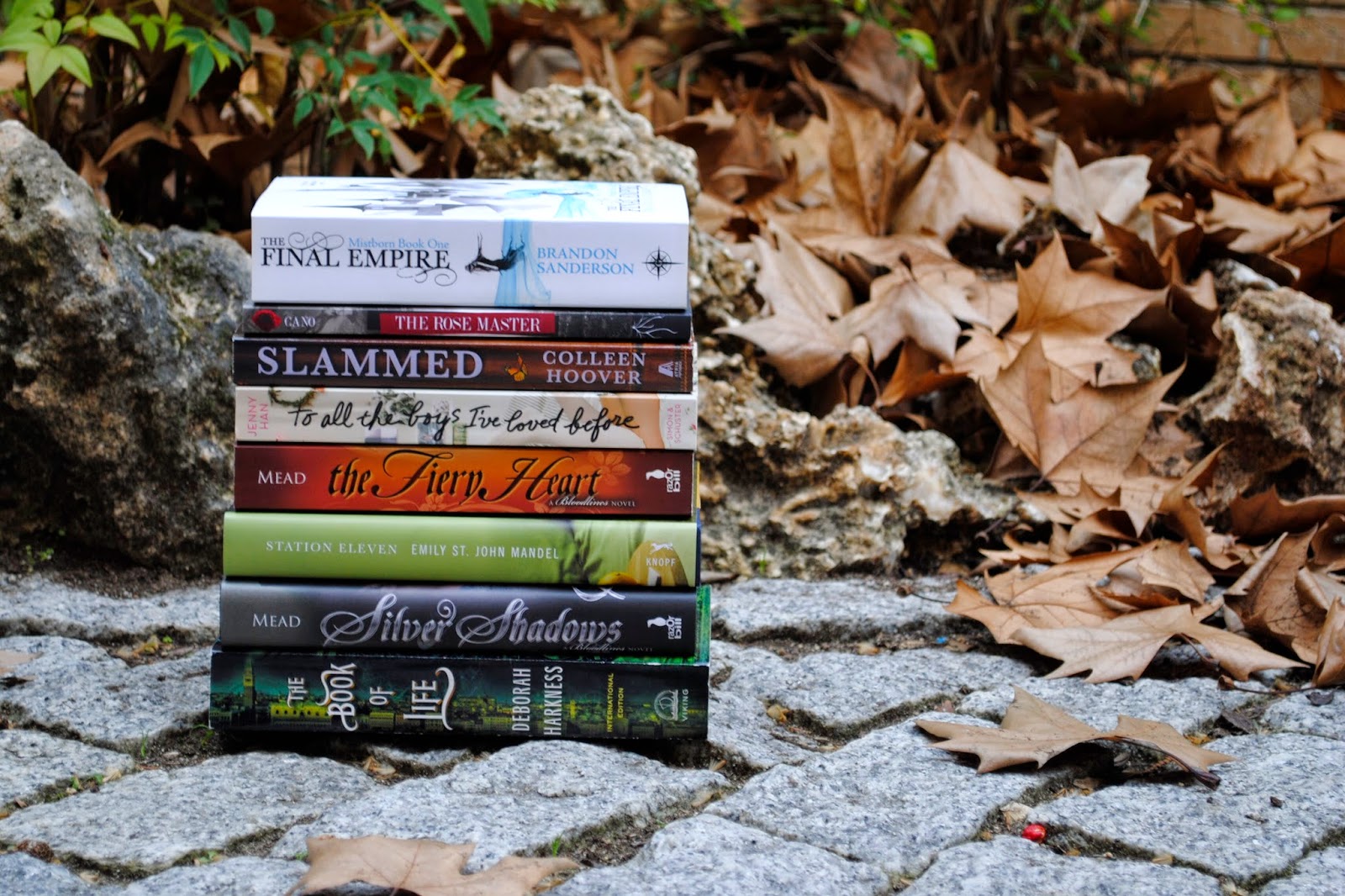 1. The Fiery Heart by Richelle Mead
2. The Rose Master by Valentina Cano
3. The Book of Life by Deborah Harkness
4. To All the Boys I’ve Loved Before by Jenny Han
5. Silver Shadows by Richelle Mead
6. Slammed by Colleen Hoover
7. Station Eleven by Emily St. John Mandel
8. The Final Empire by Brandon Sanderson

During the first two weeks of February I was studying and I didn’t really wanna pick up heavy reading since I was at the time also reading The Book of Life. I was reading it very slowly; few chapters (like 2 or 3) each day since January and I finally got to finish it in February. I’m still processing how much downhill this trilogy went for me. The conclusion wasn’t really great, too convenient and I felt like this book could have been shorter. Anyways, I gave it 2.5 stars. As I said, while reading this I was also reading two other books. First The Fiery Heart, which is the fourth installment in the Bloodlines series. I enjoyed this one a lot but then the ending destroyed my heart. I gave it 4 stars. The second was The Rose Master, which was a very short and fun read with a gothic touch in it. I gave it 3.5 stars.

In case you didn’t know, during February Swoonuary took place. It was about reading romance books and I went for two: To All the Boys I’ve Loved Before by Jenny Han and Slammed by Colleen Hoover. About the first one I have to say that I couldn’t put it down. Yes, it was a bit cliché but it made me laugh. The family dynamic was fantastic and Kitty, the little sister, was adorable. Still, some things the characters did I wasn’t a fan of and I ended up giving it 3.5 stars. Regarding the second one, Slammed, let’s just say that I didn’t like it. My first Colleen Hoover book and honestly I wasn’t impressed. Not one bit. There was insta-love and the main characters were horrible: Layken was incredibly immature, idiotic and self-centered; and Will, whose contradictory behavior was really frustrating, made me so mad. The little kids and Layken’s mother were the reason why I gave it 2 stars.

After that I went ahead and picked up Silver Shadows, the fifth installment in the Bloodlines series, and although I overly enjoyed it, it also frustrated me. Some of the decisions the character made were stupid and they filled the story with unnecessary drama. I also felt like the storyline in this one was a bit similar to another Vampire Academy book. Oh, the ending was a tad predictable as well. My rating? 3 stars.

The second-to-last book I read was Station Eleven by Emily St. John Mandel and I highly enjoyed it. I did a full review that you can all read clicking HERE and I gave it 4.5 stars. Finally, the last book was The Final Empire and oh, boy you have no idea how much I enjoyed this! It’s true it took me a while to get used to the magic system and how everything worked but once I got that figured out, well the action scenes were awesome! The world building is fantastic and the characters very well written. Sanderson knows how to write fantasy. I gave it 4 stars.

For more bookish updates you can follow me on Goodreads ^^