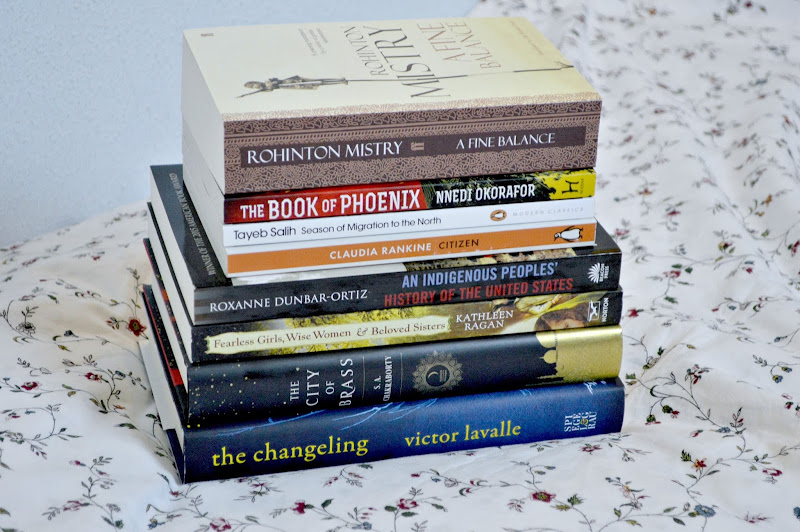 Books, books, books and always more books. Until now. I hate the word 'ban' so I'm not going to use it but I've decided to not buy a single book until I'm done with finals in February. I've said getting book mail makes me happy. However, it also distracts me from studying.


Lately, my book hauls have been very plain, a few pictures and a list of the books shown. Since I won't be doing more in a few months I thought I'll tell you why I picked these titles. Most were bookstagram/booktube recommendations.

- A Fine Balance by Rohinton Mistry. I'm studying some of his poems & short stories for my Canadian Literature course and I'm really enjoying his work so far. This is supposed to be a masterpiece and one I want to read during the summer once I'm done with Uni and I can fully commit to it.

The next three books I saw in Sunbeamsjess's September & October Books video. She's an English youtuber and is currently doing a MA. I love her taste in books.

- The Book of Phoenix by Nnedi Okorafor. This one is the December/January pick for her online bookclub. Sounds amazing and it's the prequel, I believe, to Who Fears Death, which HBO is doing a TV show of.

- Season of Migration to the North by Tayeb Salih. A post-colonial text about two men from Sudan and their different experiences in Europe.

- Citizen by Claudia Rankine. A non-fiction book written in, I believe, prose poetry about ongoing race issues in the 21st century.

- An Indigenous Peoples' History of the United States by Roxanne Dunbar-Ortiz. I've never heard of this book before until I saw it on half_book_and_co's instagram. Sound pretty interesting and something I wanna know more about.

- The City of Brass by S. A. Chakraborty. A fantasy novel about a woman living in the 18th century Cairo. It's the first installment in a new trilogy and the reviews are pretty good.

- The Changeling by Victor Lavalle. I believe this is a fairytale re-telling and it's about a man whose wife disappears one day after committing a horrific act. Russell from Ink and Paper Blog is starting a book club (The Around the World in 1000 pages Book Club) and this one will be the first pick for January.

That's the end of the haul. Let me know if you've read any of these titles or if you'll be interested in doing so.