His Dark Materials by Phillip Pullman 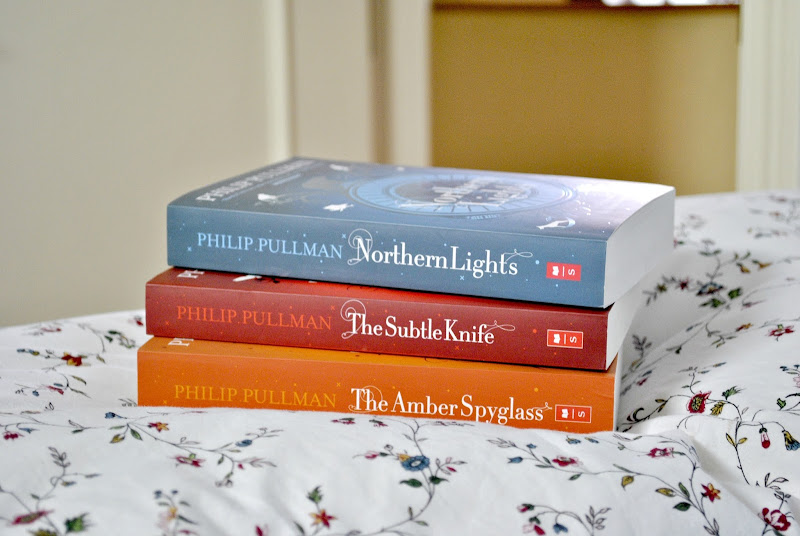 Reading His Dark Materials has taken me 14 years. Yes, you read right. 14 bloody years. I was 12 when I picked up the first book, before the (let me just say it, horrible) movie came out and after that, I never finished the last two books (one of my friends told me she didn't enjoy the ending and that was reason enough to not waste my time). Things changed this summer when I decided it was finally time for me to see what all the fuss was about. I'm glad I read it now, as an adult. I know as a child I would have had a different opinion of it and so many things would have been lost to me. I can see why these books created such controversy (with the Church especially)

Northern Lights is the start of the story, and my favourite. I remember, as a kid, being marvelled by daemons and Lyra's Oxford, the (sort of) Viking-warrior bears, the witches, the gypsies and everything that made the world so fantastical. And I'm still marvelled by it now. I love Lyra's feistiness and loyalty; how she just goes on an adventure to rescue her friend Roger without blinking an eye to consider the dangers ahead.

The Subtle Knife threw me off a little bit. We are introduced to a new character, Will, and although I like him, I was obviously expecting the story to mainly follow Lyra's life. With Will the world expands and we get a better look at the complexities of the story. When I say that the book threw me off it's because I was not expecting the story to go in the direction it went and I was a bit shocked. I can't say more without spoiling things but I enjoyed the read, especially the second half. The ending was like: "shit."

Despite the fact that The Subtle Knife ended very abruptly, I didn't pick up The Amber Spyglass straightaway. One of the reasons for it was because of the mixed reviews and because as I said my friend disliked the ending a lot. So, two month after finishing The Subtle Knife, I decided to simply go into the conclusion with very low expectations - because otherwise I wouldn't get to it before the end of the year and I couldn't let that happen. Having low expectations worked. I can see why my friend disliked the ending so much since she read it when she was 13. It's not your typical children's book ending. The story shifts a lot and although we get some answers, we still get more questions as the world and how it works keeps expanding. Most won't be happy with the ending, but I was. I think it was fitting. The only big problem was how much Lyra and Will change. I won't go into details here for obvious reasons but Lyra especially felt very different from the person she was in Northern Lights. I guess Pullman had his reasons but I still feel a little uneasy about that.

All in all, His Dark Materials is a book - I believe that even though most people say it's a trilogy, it shouldn't be considered as such but simply a very long story that was divided into three installments - that whether you like it or not, won't leave any reader indifferent.