October 31, 2014
October is almost over and I wasn’t really planning on uploading my monthly wrap-up until tomorrow but, well, I have nothing better to do and I’m bored. I’ve read six books this month and I’m gonna start doing some sort of mini-reviews on my wrap-ups to make up for not fully reviewing every book I read. And I think just throwing titles here and there and just telling my rating and whether I like the book or not no longer seems enough for me in a way. So here we go: 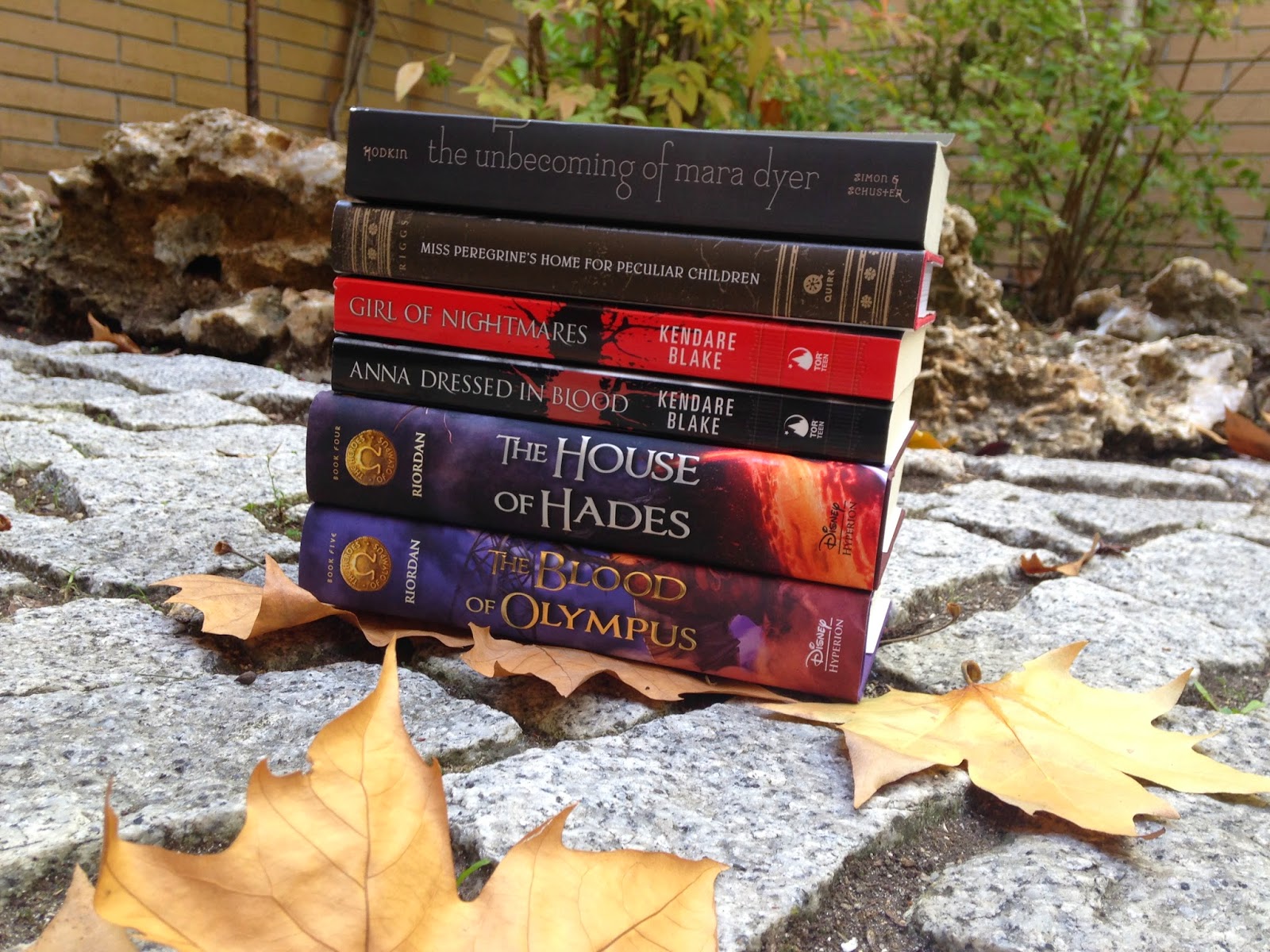 Let’s start with The House of Hades, shall we? This is probably my favourite out of all the series. It’s definitely darker compared to previous ones and I loved how Riordan wrote about more mature aspects in a subtle but still strong way. As always, Riordan’s writing is very fast-paced and funny. 5 stars for this one.

Regarding Anna Dressed in Blood I must say this wasn’t scary at all, a little bit unnerving and gruesome at parts but not really horrifying and it’s good, don’t get me wrong, it’s actually a great book for those who would like to read spookier books but still want to sleep at night, know what I mean? It was an enjoyable read but nothing very special. I really like some of the side characters, especially Thomas. And well, Anna was fantastic. I gave it 4 stars

My next read was The Blood of Olympus, the fifth and final installment of the Heroes of Olympus series and because of that I cannot say much without spoiling it, same as with The House of Hades, but I can say that it was bittersweet ending and that I wished some things had been written differently but still I had to give this 5 stars. It was hard to say good-bye to Percy & Co and I may have shed a few tears. I wished we could have got to read Percy’s POV one last time though because this is the last book and it all started with Percy and so I think we fans deserved that too, at least one chapter at the end. But well, we can’t have everything, right?

To continue with my halloweeny theme I picked up Girl of Nightmares and frankly, it was boring. To put it shortly, this book is 331 pages long and for me it started to pick up at page 200… so, not good. I got the feeling Cas, the main character, was completely out of place; as well as Caramel, one of the side characters. They were not the characters from the first book. Thank goodness for Thomas, he kept me reading. The ending was too rushed as well for me but I did like the sacrifice feeling in it and the whole lesson of doing the right thing. Hence, my decision of giving it three stars.

Then we have my two TBR-jar picks for the month: The Unbecoming of Mara Dyer and Miss Peregrine’s Home for Peculiar Children.

Regarding Mara Dyer I have to say it was a super fast-paced read and I liked the premise of this book a lot and how Hodkin wrote it to be so confusing at times, making the reader doubt what was true and what wasn’t. But it was also frustrating lol. And let’s talk about the ending because it was like being slap in the face. Those slaps you don’t see coming and are left with a stupid expression on your face? Yes, that kind of ending. I gave it 4 stars.

Miss Peregrine’s was not what I was expecting but it was still enjoyable. The story itself was not creepy but some of the pictures are a whole different thing though. Some of them were quite unnerving so keep that in mind. However, I did have some problems with this book, concerning the romance which was really off and not really believable and towards the end there were some confusing parts in the story but overall, I highly recommend this book. And, also keep in mind as well that it is a slow-paced book so if you are looking for a super quick read, then this is not for you.