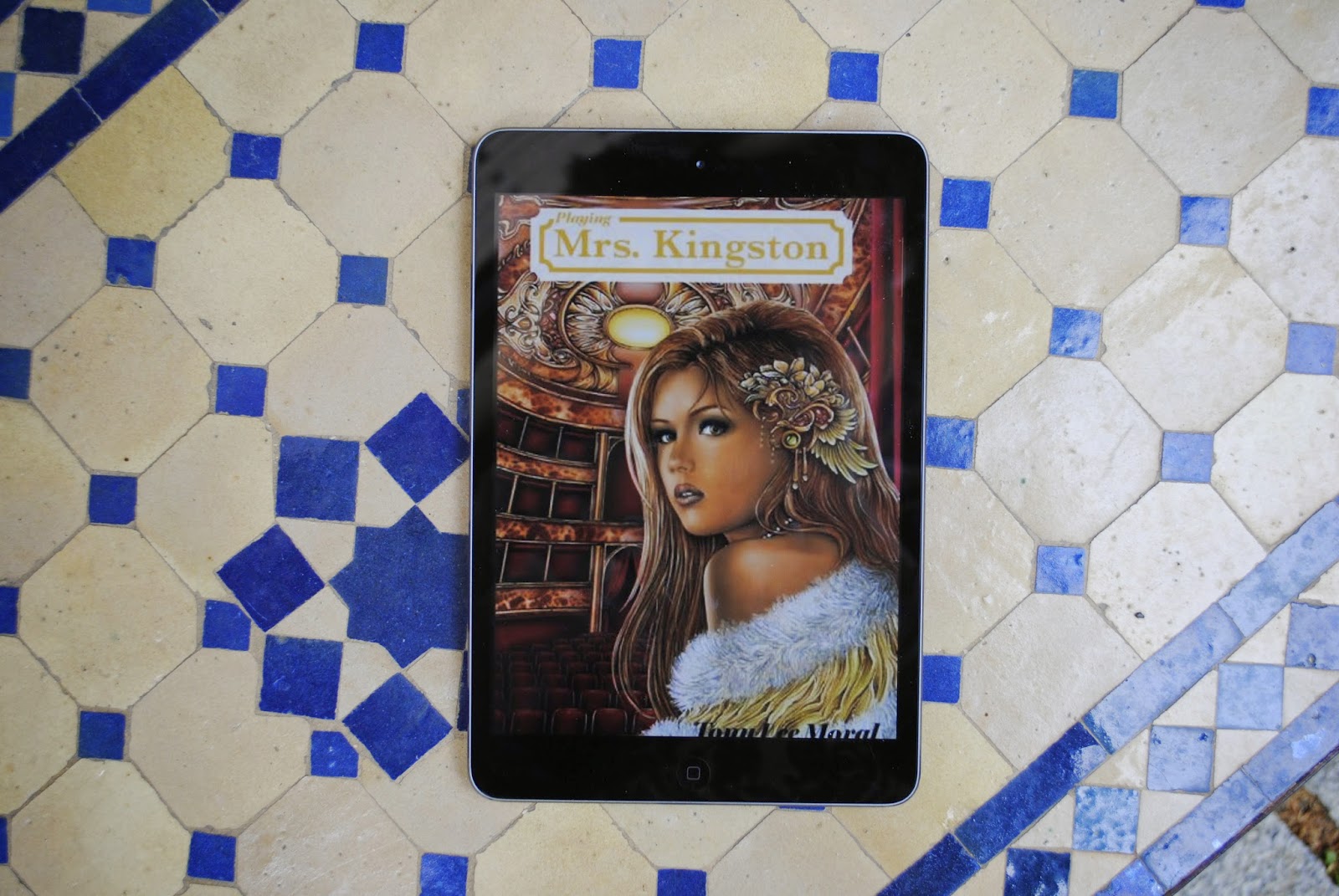 Playing Mrs. Kingston by Tony Lee Moral {Goodreads}
Published by Porfirio Press (Zharmae) in 2014
E-book edition; 378 pages {BookDepository}
“It’s the ‘50s in New York City, and Catriona Benedict has big dreams, but when her first promising gig as an actress is a flop, she has to figure out some other way to make a living in the big city. Enter Miles Kingston, a rich and influential playboy who, for reasons of his own, asks Catriona to take on the biggest role of her life…as his wife. Despite her boyfriend’s misgivings about the arrangement, Catriona knows that this could easily be the most lucrative acting job she’s ever had. All she has to do is keep up the act for a few weeks, and she’ll walk away with thousands. When tragedy strikes, the whole arrangement threatens to strangle Catriona. She quickly realizes that living with the Kingston family is a much more delicate and dangerous affair than she ever could have guessed. And if she isn’t convincing in the role of Mrs. Kingston, much more than just her acting career will be at stake.”

{First of all, I need to thank the author, Tony Lee Moral, for allowing me to read his book in exchange of an honest review}


Playing Mrs. Kingston follows Catriona Benedict, a struggling Broadway actress, and how her life is shaken up when a rich man, Miles Kingston, comes into the theater and makes her an offer she can’t possibly refuse: to marry him in exchange of money. That way both of them win. He would be able claim his inheritance (since he was required to be married in order to do so) and Catriona would have enough money to leave America and go live in Italy with her boyfriend Mario and also, pay some debts. Little does she know about where she’s going into. Though the deal is supposed to last a few weeks, misfortune happens and Catriona finds herself in the middle of a mystery that not only threatens her promised money, but also her life.

This book was so much fun to read. The mystery itself was very well-thought and nicely structured; some twists here and there kept me guessing throughout the entire novel and Playing Mrs. Kingston was indeed a deeper story than I thought it would be. Right from the beginning, Tony Lee Moral starts building the atmosphere of the story. You end up mistrusting everybody and although I see a bit of one of the twists coming – you might be wondering how I could see only one bit of a twist... but what I mean is that I figured who were the people involved but not really the stuff they were involved into. Does it make any sense? It’s the best I can do to explain it without spoiling anything – I still enjoyed the resolution of the novel a lot.

Another thing I really appreciated about the book was the writing style. It was rich yet simple and when you’re dealing with mystery novels, you need something easy to follow. Also, being based in the ‘50s I think added something more to the whole story. Finally, the characters. I liked some alright and they were consistent (thank you!) but I didn’t care for a few of them. Catriona was a strong and stubborn woman and all she’s trying to do is survive in the jungle that the rich society is. But she also annoyed me a bit, as well as her boyfriend Mario. He was possessive and saw threads where there weren’t any; many times he got in the way and made things worse, which was irritating. But he really loved Catriona so that redeemed him in my eyes.  My favourite character was Freddie. So funny and sassy. Unlike the Kingston family, in general. Just saying.

So, all in all, Playing Mrs. Kingston was a great thriller for me and I do recommend reading it if you are a fun of the genre.