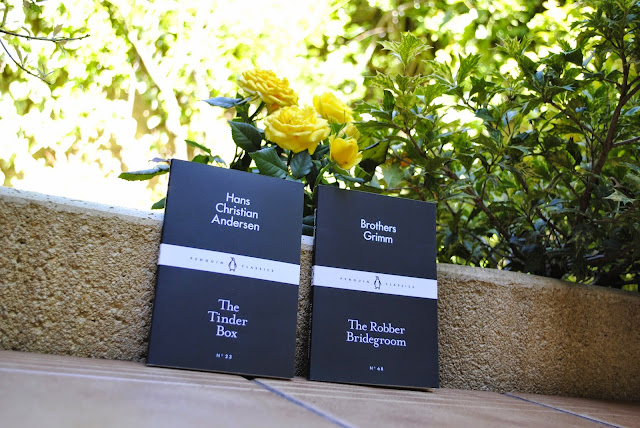 
Fairytales are an important part of our culture. Wherever we go, we find different versions of different fairytales. However, two or rather three authors stand out big time: The Brothers Grimm and Hans Christian Andersen. I will first talk about The Robber Bridegroom and then about The Tinder Box.

Back in March I could enjoy the reading of some of The Grimm’s tales and even though some of the stories I’ve already read where in the Little Black Classics edition, there were others new for me that had fascinated me but also disappointed me because either the morality behind some of the fairytales was conspicuous by its absence or I didn’t catch it, which is a possibility. In any case, this little book is a great place to start reading The Brothers Grimm’s stories if you’re interested. Sometimes, the tales have those Grimm’s characteristic gory details that make me wonder how it is that they were written for children – an example is The Master Huntsman – and other times the Brothers surprise you with tales full of wit and fun like The Devil’s Three Golden Hairs. This edition also includes my favourite tale so far, which is Snow White. I adore that is so different from the Disney version. You need to read it, seriously.

I still cannot believe April was the first time I’ve read Andersen when I’ve grown up with his tales. It’s not the same though listening to the adapted versions than reading the original ones. That’s the case of The Steadfast Tin Soldier. The ending I was told as a child has nothing to do with the original ending, to my great regret. I didn’t think Andersen could be so dark and troubling, even more than Brothers Grimm. Reading Little Claus and Big Claus was particularly disturbing and probably alongside The Red Shoes the most distressing tales of the whole set.

All in all, these two collections are great to get a first impression of what these authors can offer. I certainly plan to continue reading their fairytales although not all of them have a happy ending. My average rating of both books was 3.6 stars.

Have you ever read fairytales? Which authors or tales are your favourites?

For more bookish updates, you can add me on Goodreads!