July 31, 2015
July is over. I'll say it again. July is over. I'm not panicking, you are... Anyways, July hasn't been an overly exciting month for me besides turning 24 even though that wasn't exciting at all. 24 years old... is gonna take some time getting used to. But then again I still say I'm 20 (unconsciously of course) when people ask *shrugs*.

For a few months now I've been including more stuff than only books on my wrap-ups. However, I'm doing this on a rush (I'm not proud to say it though) and I will talk about the books I've read this month, which is more than enough really because I've read 14 books. How I managed to do so is still a mystery to me but taking part in the #24in48 readathon might have something to do with it since I managed to read 5 books and a half in 2 days (most of them were very short) 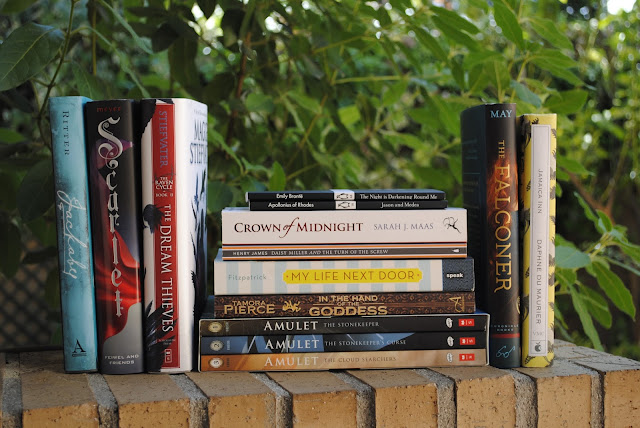 Jackaby by William Ritter. 3 stars. I liked it but it wasn't something incredibly special. But it was entertaining enough. Jackaby was a very nice character but I just happen to love weirdos from time to time =P

Scarlet by Marissa Meyer. 4 stars. What a phenomenal sequel. I had so much fun reading this; I couldn’t put it down and I’m so ready to read Cress.

Jamaica Inn by Daphne du Maurier. 3.5 stars. I enjoyed this one. It was my first book by du Maurier and it will not be my last. Although it has a great dark atmosphere, the ending felt underwhelming for me. I saw the big revelation but I still enjoyed it a lot.

The Dream Thieves by Maggie Stiefvater. 4.5 stars. Wow, wow, wow! This YA series is more than just a YA series. The writing style is so beautiful and poetic and although it dragged a bit in the middle, the last 100 pages were like BOOM! TAKE THAT! IN YOUR FACE!

The Night is Darkening Round Me by Emily Brontë. 3.5 stars. First thing first, poetry is not my strong point. I struggle a lot with it but the little black classics editions are the perfect excuse to get more into it and try to get out of my comfort zone (and also, I will have to read a lot of poetry on my next year at Uni so I’m just preparing myself…). Thankfully, this collection was very easy to read and follow; some poems were better than others but all of them were very depressing, so take that into account as well. But it was a very lovely read, regardless.

Jason and Medea by Apollonius of Rhodes. 3 stars. Another little black classic and it’s only an excerpt of the entire piece of work and for that I felt a bit disappointed.  I liked it still but something was missing and I think I will pick up the whole thing in the future because I studied the author the past semester and I’m intrigued to read more classical literature.

In the Hand of the Goddess by Tamora Pierce. 2.5 stars. Sadly, I had more troubles with this sequel than I did with the first book. It’s a fun and very quick read and if you want to simply disconnect I will encourage you to pick up the book but… it was like Alanna, the main character, wasn’t mentally growing even though she goes from 13 to 16 during the book (and it has only 241 pages…). She reminded me of the 11 year-old girl she was in the first book and that annoyed me a lot. Goodreads says this is YA and for me this is middle grade, period.

Amulet, vol. 1 by Kazu Kibuishi. 4 stars. Super fun graphic novel. The artwork is beautiful and the story is so imaginative and magical. Pick it up! It’s middle-grade though but such a worth it read.

Amulet, vol. 2 by Kazu Kibuishi. 5 stars. This sequel was perfect and the first full 5 star rating for me in a while. I adored it and it went straight to my favourite shelf. IT IS EXCEPTIONAL.

Amulet, vol. 3 by Kazu Kibuishi. 4 stars. Still good, in the same like as the first volume so it was also fantastic. And I need to buy the next 6 volumes because I need to know how the story continues. So, so good!

The Falconer by Elizabeth May. 2.5 stars. Enjoyable read, likeable character and funny dialogues. Not a very innovative plot but not bad either. I could have given easily given it 3 stars if it wasn’t for the ending. God, what a poor executed cliffhanger. It was atrocious so if you were thinking about picking this one up, wait until at least the sequel gets out (I believe in November).  The entire books focuses on one main issue and I know since it is a trilogy more mysteries should be add to the story and I’m okay with that. The problem? This book doesn’t do that. This book doesn’t do that. You have two main issues and neither of them gets resolved, not even partially. I threw the book when I was done. I don’t even know if I’m gonna waste my time reading the sequel to be fair.

Crown of Midnight by Sarah J. Mass. 3 stars. You guys know I didn’t particularly enjoyed Throne of Glass but I was willing to give the sequel a shot and see if this series was worth reading. The sequel is divided into two parts. The first one I didn’t like. I didn’t hate it though but it was too focused on the romance and it was pretty meh. However, after the final events of part 1 (EXCUSE ME I DIDN’T SEE THAT COMING AND I ALMOST DIE) things got better – in other words: less romance and more action (YAAAAAASSSSS) and the 3-star rating is thanks to that. It saved the book for me and although the reveal at the end wasn’t that exciting it was intriguing enough. So, yes, I will continue with the series. First with the novellas and then with Heir of Fire and again, after that I will decide what to do.

Daisy Miller by Henry James. 2 stars. I had to study Henry James last semester and read and excerpt of Daisy Miller and I basically decided to read the whole thing during the summer. It is an OK read but I just didn’t see the appeal, if you know what I mean. It’s not atrocious… it’s just that something was missing for me to enjoy enough to give it 3 stars.

My Life Next Door by Huntley Fitzpatrick. 3 stars. I liked it. It’s nothing too special but it isn’t horrible. The Garrets were an incredible family (George being my favourite) and Tim, Sam’s friend, was also great in my opinion. It’s a very quick, heart-warming contemporary novel. Still, I feel entitled to tell you that some of the characters get quite annoying at some point… but what is new in YA novels?

That’s it for my July wrap-up! How did July treat you? Did you read some amazing books?