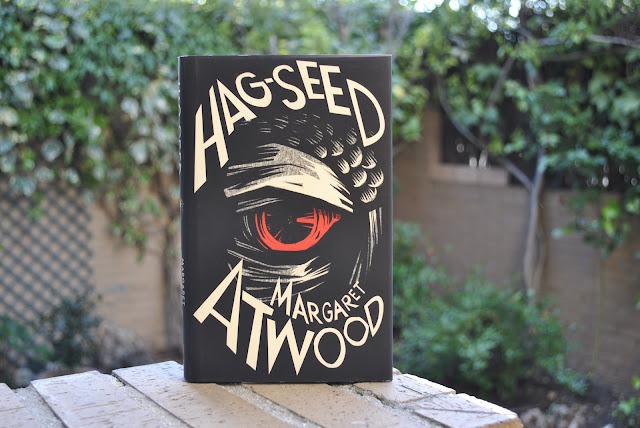 Hag-Seed is a re-telling of Shakespeare's play The Tempest. This book is part of the Hogarth Shakespeare series and my first time reading Margaret Atwood - spoiler alert: won't be my last. In this re-telling we meet Felix, an Artist Director at a theatre, before being removed from his position by Tony, his right-hand man, while he was working on adapting The Tempest. After this betrayal Felix disappears and forgets about the world until a new job offer - teaching theatre in a prison - presents the possibility of revenge and the opportunity to finally direct his version of The Tempest (let's count how many times Noelia types The Tempest in this review, shall we?)

First of all, The Tempest is by far my favourite Shakespeare play of the ones I've read so far and I was really intrigued to see what Atwood did with the story. Overall, I was not disappointed by it but I did have a few issues with it. Hag-Seed is a "fun" read, despite dealing with revenge, guilt and madness. I particularly enjoyed all the details about performing a play and the work that goes behind it. There is a lot of analysis about the play as well, about the characters especially, and although I had no issues with it I can see why for some people it might feel like a lecture. My main problem was that knowing the play beforehand did influence my reading experience: the plot of the book became a tad predictable and I somewhat knew how the story would unravel. Anyways, this book is an entertaining and fast read and if you like the sound of it, I'll say give it a go.